The madness of Edwin M. Stanton 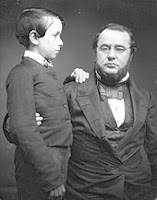 There is a quintet of stories about Stanton's displays of insanity, each triggered by grief except the last, which culminates in (rumored) suicide. I encountered these on the Internet and went to one of my Stanton biographies for a "sanity check."

Harold Hyman posthumously finished a biography started by Benjamin Thomas (Stanton: The Life and Times of Lincoln's Secretary of War). The evidence handling is better than nowadays and I like the way they (admirers of Stanton) manage his many villainous acts without insulting their readers' intelligence. Quite a different treatment than the patronization you get today.

I. Digging up his fiancee's grave

Online, there is a report of Stanton personally exhuming his fiancee's corpse to confirm her death.

This seems to refer to Ann Howard, a woman Stanton had taken interest in (but who is not described as a fiancee). Our biographers report that she served Stanton lunch at noon on 8/9/33 and then died before 4 pm. The killer was cholera, hence the family interred her remains immediately.

"When Stanton learned of the horrible event, he experienced a morbid conviction that she had been buried alive. Persuading a young medical student and another boarder to help, he hurried to the burial ground and by lamplight exhumed and opened the casket. At the risk of contamination he made sure that the girl's body gave no sign of life..."

Online we learn that Stanton had his dead daughter Lucy disinterred and her remains placed in a box which he kept at his bedside for "more than a year."

In Thomas/Hyman it says that a student clerking in Stanton's law office is the source of the story that Lucy was exhumed a year after death and her remains placed in a metal box, specially designed and "kept ... in his [Stanton's] own room." The student was named W.S. Buchanan. Lucy died in 8/41. Exhumation a year later would be around 8/42. Our authors dispute Buchanan's account on the basis of a March 1844 letter written by Stanton saying his wife wanted a memorial placed on the daughter's grave. They view this as proof her remains were still buried. However, the two pieces of evidence are not contradictory. In characterizing Buchanan's account, Thomas/Hyman say Stanton is here depicted as "once again gave way to the morbid instability he had displayed" in the Ann Howard affair. "Morbid instability" is the meme here.

III. Sleeping with his wife's remains

Online we are told that Stanton had his deceased first wife Mary clothed in her wedding dress and her remains kept in his bed, sleeping with the corpse for a time until having her buried along with Lucy's remains.

Thomas/Hyman note that this 3/44 death put Stanton into grief "that verged on insanity." They do not mention him sleeping with her corpse but mention him altering and re-altering her wedding dress for the burial. He "stealthily" brought mementoes to her grave including jewelry and letters. He "spent hours rereading her letters..."

IV. Unhinged at his brother's suicide

The story online is that Stanton became "unhinged" at his brother's suicied and had to be sought in the woods where searchers feared he woudl take his own life.

On 9/23/46, Stanton's physician brother cut his own throat with a razor, one witness of the death scene noting the blood even spurted to the ceiling. Thomas/Hyman note that the distraught Stanton fled into the woods (at seeing the site of the suicide?) and that searchers found him and led him out of the forest before he could harm himself. The biographers say Stanton was "oppressed grievously."

V. Death by his own hand

Online you will find accounts that make Stanton's death a suicide.

Thomas/Hyman have Stanton dying after losing consciousness in the evening of a day in which he was wracked by coughing. They do not enter into the suicide question.

After his death, one of his doctors felt it necessary to issue a suicide rebuttal. This may be worth a look.

The oddest thing was Grant's comment on Stanton's death, that he "was as much a martyr to the Union as Sedgwick or McPherson." Sedgwick and McPherson were killed by fatal wounds. What was Stanton's fatal wound if he died of natural causes in his own bed after the war?