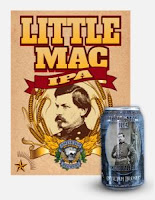 Antietam Brewery knows what's what. Unfortunately, the website does not include the text on the beer label (right). It says something like


Little Mac was loved by his troops for his concern over their lives, a concern that caused Lincoln to fire him.

That's near-enough history for a beer label, I think. And Mac is the only general honored with a beer label here. (IPA is not my style, but I'll make an effort to hoist some of these.)

The brewery has a Clara Barton beer as well but no Dorothea Dix. Call that a wash.

Civil War history is about choices; beer is about choices. Until Joe J, TJ or REL get honored in this way, beer history now belongs to this outstanding Civil War commander. Satisfying beer, satisfying history and all is right with the world.
Links to this post

We remember this milestone in part because it puzzles at first look: why that number of men and for that duration of service? This post looks at the Federal orders, the underlying law and then how some historians report on this mobilization.

The second striking thing about it is how it copies the exact language of the 1795 militia act (“Militia Act”), a law that invests certain authority in the president with no reference to the secretary of state. Perhaps Lincoln wrote the order and Seward distributed it under his own name?

A complete mobilization order would need the Lincoln/Seward order of April 15 (number of men) plus the Simon Cameron mobilization instruction dated April 15 (the “details” - duration and mustering information).

Duration of service
Cameron calls his message “the form of call on the respective state Governors for troops.” Thus Lincoln and Seward invoke the Militia Act and Cameron supplies the “how” whereby governors will comply. Cameron accidentally or intentionally crosses a statutory line by saying, “to serve as infantry or riflemen for three months, or sooner, if discharged.”

The Administration here reiterates the Act’s limits on individual service in a context where it really needed to specify the duration of its authority over the militia collectively. The executive branch has no authority over how long the militiaman serves: that is already specified in the law and can have no place in this order. The executive branch must specify the duration of the mobilization of units.

Note that the way the law is written, the emergency can outlive the availability of individuals. Units can be under federal control after their individuals have been released. This distinction is interesting and explains the strife over demobilization in the summer of '61. We have these scenes of officers appealing to their three-month men to volunteer to continue the war under a lawful federal direction that exceeds three months - past the period of statutory personal commitment.

The Act limits the president’s authority over the mobilized units providing a maximum duration of 30 days beyond the convening of the next Congressional session. This is a flexible deadline that could extend for the better part of a year or even several years (theoretically!).

Lincoln called for Congress to convene on July 4; thus his authority over the units could extend to August 3. Cameron, however, emphasizes to the governors the duration of mobilization as keyed to the individual’s three months. Depending on muster speed, Cameron’s units - governed by personal demobilization timetables - could end service as early as July 16. Mind the gap! If it takes three weeks to muster in, only then do Lincoln’s and Cameron’s timelines match up.

The Act says: “no officer, non-commissioned officer, or private, of the militia, shall be compelled to serve more than three months after his arrival at the place of rendezvous, in any one year...” Cameron uses “rendezvous” in his own communiqué to indicate the in-state mustering points. But could not the federal government have instead specified rendezvous points as federal camps in Washington, St. Louis, wherever? This seems another lost opportunity to conserve time.

In Lincoln, David Donald makes this accurate and insinuating comment: “the volunteer force would have to be disbanded earlier if the president called Congress into session earlier.” This implies Lincoln may have chosen his July 4 congressional summons to give him a full three months’ use of the force.

But Lincoln could just as well have convened Congress on September 4. The units would still have been under his authority by then though most of the men who made up the units would have exercised their rights to leave long before then.

Thus, the Administration seemed to view the practical matter of length of individual service as driving the entire mobilization. An interesting take on the law.

Now, once Congress convened it could have amended the Act to extend the individual's term of service and/or the period of mobilization. Why was this not done?

Lincoln and Seward: they specify how many but not for how long.

Cameron: he specifies for how long, shortening the statutory limit of presidential authority by tying it to the individual length of service.

Cameron's modification of the law, Seward's signing the mobilization decree, these are symptoms of the informality and ad hockery that would characterize Lincoln's entire time in office. In his Diary, AG Edward Bates makes no mention of reviewing the language in either Lincoln's or Cameron's messages. He would have harmonized them had he been allowed to.

Mobilizing “the militia”
Gov. Morgan of New York found the form of the mobilization destructive to “the distinctive character of the militia of the states.” The mechanism of that destruction is in Cameron’s message.

The levy on states is given as a number of regiments and a regiment is given as exactly 780 men. So the levy on New Jersey, for instance, is not for men as such, rather it is for four regiments of 780 men each. This devastated some of the existing militia organizations in ways we’ll explore in a later post.

The men of the United States lived under a system of universal military conscription into state militias, per the two federal militia acts of 1792 and the superseding Act of 1795. Every man who ever drew breath in the Civil War was a militia man, whether in federal service or out of it. (The few exceptions are not worth recounting.)

The Cameron message views the militias not as units ready for combat (volunteer militia) but rather as random individuals to be formed into brand new regiments (volunteers from the compulsories). And this is overwhelmingly what the governors supplied.

These were not militia units in any meaningful sense; it’s as if men off the street had joined the U.S Volunteers directly. Cameron: “to cause to be immediately detached from the militia of your state, the quota designated in the table below...”

Although some militia units kept their pre-war character during the mobilization, the militia regiments generally were scratch forces of men mobilized for temporary federal service into new formations.

One imagines the War Department drafting Cameron’s message with an eye toward uniformity, ease of supply, efficiency. Efficiency is not effectiveness.

Michael Burlingame, in Volume 2 of Lincoln: A Life, says “The Cabinet also considered the size of a militia force to call up. Some favored 50,000; Seward and others recommended double that number. Lincoln split the difference and decided to ask the states to provide 75,000 men for three months.”

Goodwin in Team of Rivals matches Burlingame’s explanation of the 75,000 but has nothing to say about the period of mobilization.

McPherson in Battle Cry of Freedom does not explain the 75,000 and cites the Militia Act as reason for the duration of mobilization.

So we have no good explanation of how this number was arrived at and no complete discussions of the mobilization itself. And "splitting the difference" is yet another disturbing thread of informality that runs through this entire episode.

In sum
The Union mobilization of the militia is one of many complex Civil War events glossed over by the storytellers, leaving readers satisfied that they understand an event when they actually misunderstand it. Its deep meanings on many levels should repay much more study.