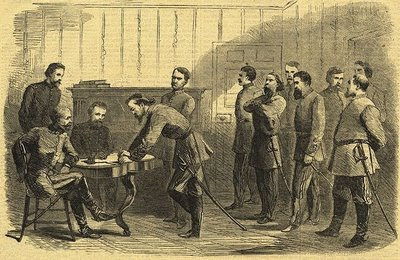 The local press dug into Jay Winik's 1865 to try to figure out how there could be surrendering in North Carolina after Appomattox.

They did a decent job of half-understanding what they tried to read. The reference to Winik as an historian, e.g., is cute (a civil servant, he wrote 1865 only, and that is merely an historical essay) but Johnston's surrender did not remove the spectre of continued war, as implied here. Nor can that conclusion be drawn from Winik. The Confederate government, led by Breckinridge, continued moving south and west after Davis's capture.

Lack of interest in Johnston's surrender site is not just about Appomattox blindness among ACW readers, it's also about the ambiguous end-of-war date. It's a discussion that needs to be aired.