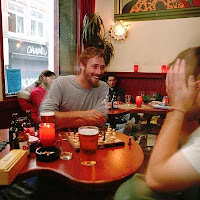 Can we get some historians into the National Park Service and over to Harpers Ferry? The freshmen are running the seminar.