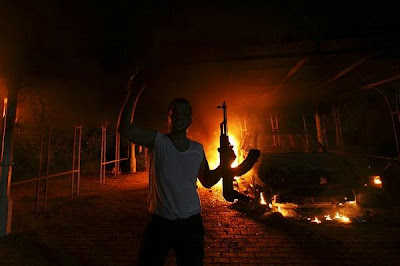 We don't do political news except as it harkens back to ACW controversies, nevertheless, the scalps were called in this blog 15 days ago, although Ham's was already taken. Let us now mark them all for the Smithsonian:

The first two seem to be victims of Panetta's growing Stantonism.

It amazes me that Panetta could hold a press conference after Benghazi, tell everyone publicly that he ordered the military not to respond to the attack and there still is confusion over what happened.

The Civil War reader revels in civilian control of the military and hisses theatrically, like a vaudeville theatre-goer, at the mere hint of a Harrison Bar letter. And here we are.

Civil War controversies keep repeating. It will continue so until we stop shrouding the controversies in narrative and engage them as living issues of principle.

p.s. CIA chiefs with undeclared girlfriends - as big deals go, they don't get any bigger.