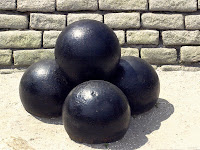 Another one of those stories where the reporters and city officials are too ignorant and illiterate to explain what the problem might be:
Museum calls in bomb squad fearing possible Civil War cannon ball explosion.

Hat tip to a dear reader. Best line in the story, "...the cannon balls and artillery rounds did not have fuses and would not have exploded without having been lit, according to the Associated Press."

Let's have no smoking signs around those cannon ball stacks near the historic cannon displays.