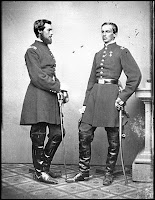 As a McClellan hater, the late Edwin Fishel had few equals; nevertheless his deeply flawed history of Union intelligence - published 11 years ago - had three irreplaceable findings that have been largely ignored by Civil War authors. These are:

(1) Pinkerton achieved a very high degree of accuracy (well over 90%) in identifying Rebel units opposite McClellan and in theatre.

(3) McClellan assigned the d'Orleans brothers (from his staff) to act as intel analysts in evaluating the raw intel Pinkerton's and McClellan's sources were producing.

By adopting a loud tone hostile to McClellan, Fishel misled his conventional readers into thinking all was well with the master narrative - and yet these three points cause chaos in the master narrative. I have seen this again and again - indoctrinated researchers fighting against the implications of their own findings.

The possibility that Pinkerton did well remains unknown to the general reader. The idea that McClellan had a check on Pinkerton and himself (the brothers) remains likewise unknown. The idea that Virginia's governor Lechter staged total mobilization of military aged men and sent them to Johnston's army - maybe exceeding that 75% fill rate?! - is likewise a complete mystery to faithful readers of ye olde doctrine who imagine the Rebel army in front of Washington might have been in the mere 30,000+ range after disease and sickness.

So, McClellan and Pinkerton did not act as their own analysts and Fishel generously credits GBM with this United States military "first." You'll need to remember this when we see the brothers in action tomorrow in a sampling of Beatie's AOP Vol. III.