About all those critical thinkers 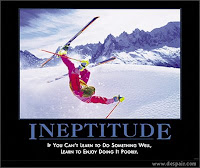 I think we all (advanced ACW readers) ask ourselves as we read, "Where did this come from?" and "Why do I believe it?" or "Why does the author believe it?"

We are by nature close readers which makes for critical thinking. At the same time we are confronted by an endless stream of naive, careless work from historians coming out of or going into academia. How can this be?

There is an interesting passage that helps explain the situation in a Defense Intelligence College publication, "Critical Thinking and Intelligence Analysis." It stunned me:

Despite its importance, critical thinking is not widely taught in schools and universities. A mid-1990s California study on the role of critical thinking in the curricula of 38 public and 28 private universities ... concluded that university faculty members 'feel obliged to both claim familiarity with it and commitment to it in their teaching, despie the fact that ... most have only a vague understanding of what it is and what is involved in brininging it successfully into instruction.' Indeed, the authors of the study found that while 89% of the faculty they interviewed 'claimed critical thinking was the primary objective of their instruction,' only 19% could define the term and only 9% were evidently using it on a daily basis in their instruction.

Emphasis added. You can look more deeply into the study and its sponsors here.

And so this river of naive, polemical, nonfiction sludge pours forth. There is no reducing it, much less stopping the flow.