Don't let them spoil your appreciation of history 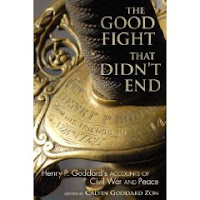 The Good Fight that Didn't End is a new book collecting the journal entries, letters and newspaper articles of Henry Goddard, a Connecticut cavalry officer. He has a journal entry dated November 10th of a type seen often:

Maj. Gen. G.B. McClellan, having been relieved of the command of the Army of the Potomac, we had a grand review from 8 a.m. to 10 a.m., the general riding past us and bowing to the cheering, he was accompanied by his successor, Maj. Gen. Burnside. It was a splendid sight, but a sad day for the Army. Curse the politicians who drove the general from his place just as his plans were developing.

At this point, the editor normally inserts an explanation on why the soldier holds foolish opinions not approved by best selling Civil War authors. This editor signally failed to do so.

The next part of the journal entry will look like indecipherable gibberish to the responsible editor and historian alike:

I never was a McClellanite till this last campaign, which has been managed splendidly. We have seized and held every gap in the Blue Ridge before him and got in the rebels rear here at Warrenton, and now he to whom we owe all this is removed.

The journal writer seems to be talking about some imaginary campaign that never happened. If the editor had replaced the passage entirely with elipses [...] he would have saved readers a lot of needless confusion. 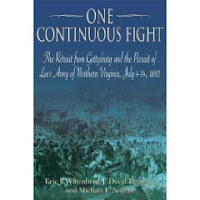 Speaking of "gibberish" in another new book, One Continuous Fight, the authors write of Pennsylvania's Gen. Gregg capturing 2,000 Confederate stragglers and 3,000 Confederate wounded in a single incident after Gettysburg. I'm not sure how this could have happened in a pursuit not authorized by Civil War historians, but in round numbers, this looks like 7% of the total force brought by the South onto the battlefield taken in just one incident of the retreat.

If these numbers look "wild," Continuous Fight offers another tidbit a few pages later. Again, the speaker sets out to purposefully confuse the reader. Here is the colonel commanding the 4th Pennsylvania Volunteer Cavalry:

I count up out of five hundred men of my regiment with whom I left Potomac creek, twenty-five with me mounted. The rest are, heaven only knows where, dismounted, killed, wounded, scattered, and not at hand.

His command has become entirely notional - to him. But to us, Civil War historians and readers, there are no notional Union commands, only excuse making and balking. I would have footnoted this passage with a comment about battle fatigue, things we say when stressed, etc.

Before you start wondering about all of this kind of crazy talk, be assured that the quotes listed here will only slip through those works not edited by knowledgeable and vigilant authorities. Stick with brand name authors and especially avoid diaries and letters if you want to maintain that clear-headed, hard-earned understanding you have held for so many years and worked so hard to attain.

p.s. These are excellent books, all irony aside, and the point here is that if your author is not "spoiling your appreciation" of previous readings, shame on him.