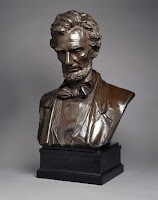 Totaling 65 tiny leaves of narrative, each larded generously with white space, we can easily see how reviewers might be stumped by McPherson's new book Abraham Lincoln. Was this a stillborn embryo of a biography? An example of failing faculties? Reviewers stayed away in droves.

In my view, Abraham Lincoln is intended as a powerful display of the author at the peak of his powers.

The whole issue comes down to, what are those powers. As I have said for more than a decade, McPherson is patently a synthesizer of secondary sources while his admirers imagine that he is an original researcher/scholar whose popular writings offer glimpses of original insights.

If you believe the latter, the book Abraham Lincoln can make no sense, for there is no McPherson reader so new to this corner of nonfiction that most of the content of Abraham Lincoln will not be familiar, warmed over, even tired. Put another way, no one's stock of Lincolniana is so low and so poor that McPherson's biography is going to surprise and delight them with fresh facts and observations. In that way his ardent admirers at last arrive at the place where the deep readers of Civil War source material have been all along – face to face with pedestrian recapitulations of well known secondary material.

For the purveyors of the myth "Greatest Living Civil War Historian," the game is up. In fact, McPherson has given them up himself. He never bought into the image that was foisted on him. Abraham Lincoln would not be possible if he had.

As much misguided praise as McPherson drinks up, he still knows much better than his adoring public who he really is and what he really does. And so the author (I contend) intended here a virtuoso performance of summation – a real knuckle buster (to borrow pianist slang) – within his beloved "public history" sphere.

To make this very public demonstration, the artist has to make choices on the lines of What is virtuosity in synthesis?

Go back to Battle Cry of Freedom where we have a comparatively long book. Take a complex issue, such as the commander's intent in Lee's Maryland Campaign; McPherson's treatment of it is to select one single secondary source that he regards as the best for this issue (D.S. Freeman) – without making a case for its excellence, BTW - then to summarize a substantive evaluation made by Freeman in a single paragraph.

So, we can derive a value system at work here. Go through Battle Cry and you'll see it continuously. McPherson's art in those early days was to choose (to his own personal satisfaction) the best secondary explanation of means, motive, and action on a single matter and then "boil it down" to essentials that could be expressed in a few sentences or less. His attributions were reasonably transparent as he saw no shame then in crediting the sources of his recapped insights.

If you view the Civil War as a series of decisions and incidents, each one of which has some controversy attached to it, each analysis of which requires a discussion of evidence, McPherson was never for you. He did not even recap his secondary sources' own travels through primary sources. For instance, Freeman might have quite a substantial review of the sources to justify his views, but these would not make it to Battle Cry's front- or back-matter. Only Freeman's conclusions would survive in truncated form.

But we don't want to get too deep in the technique here, just far enough to identify the secret sauce this artist is serving. It is the most concise single account of what McPherson deems the best thinking on an issue. He connects the issues by stringing the accounts together in a narrative. One issue or incident demands just one interpretation, one explanation. The weakness in historical method and technique are offset by a confidence in tone and faster narrative pacing.

If we compare Battle Cry with Lincoln, we are first struck by scaling issues. Battle Cry, so much bigger, can be viewed in terms of the art of compression not being perfected, as being clumsier.
The individual summaries within Lincoln are briefer than in Battle Cry. In Lincoln, paragraphs have given way to sentences.

This is not the only change in technique. Like Goodwin in Team of Rivals, McPherson wipes the slate clean of secondary sources in his new writing. He seems embarrassed to have ever been associated with secondary sources.

He has 67 footnotes for his 65 pages, only three of which contain secondary sources cited for their own value (a few more are cited specifically to extract a particular Lincoln quote only). McPherson now uses citations exclusively to document quotes. He has jettisoned the Battle Cry system of making his influences transparent, no doubt deciding that this is a luxury his readers don't need. In the case of his fanbase, I would say it is a luxury they never made use of anyway.
Needless to say, this shortens the book considerably.

Finally, McPherson includes a bibliography in which he delivers one-liners (more compression!) about this or that source or secondary study. He never divulges which author influenced him or which set the course of a particular school of thought. Imagine just four tiny pages of annotated bibliography of all the Lincoln literature, manuscript and published. This is not happenstance, this is showing off.

The question is, do we get it? Some of us have gotten it from Battle Cry onward.

Now it's time for the rest of his readership. Let them pick Abraham Lincoln up and read it in the way he intended them to. Take McPherson at his own measure for once.

He's been putting on a show - and you've completely missed the show with your scholar nonsense - now go and enjoy the show.