Russell Bonds writes to say, if you want to understand why the Grant papers were moved to Mississippi State University, look to the bulldog motif: 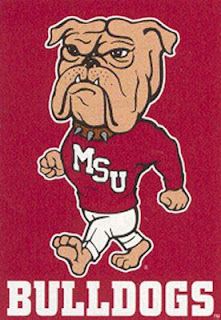 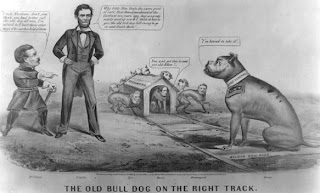 See also Lincoln to Grant, Aug. 17, 1864 ("Hold on with a bulldog grip, and chew and choke as much as possible"), OR Vol. 42 pt. 2 p. 243; F.B. Carpenter, Six Months at the White House with Abraham Lincoln (New York: Hurd & Houghton, 1867), p. 283 ("I asked the President, during the progress of the battles of the Wilderness, how General Grant personally impressed him as compared with other officers of the army, and especially those who had been in command. . . 'The great thing about Grant,' said he, 'I take it, is his perfect coolness and persistency of purpose. I judge he is not easily excited, — which is a great element in an officer, — and he has the grit of a bull-dog! Once let him get his 'teeth' in, and nothing can shake him off.'").

Behold the power of Internet Archive and Google Book Search. : )

Got a theory? Pass it along.