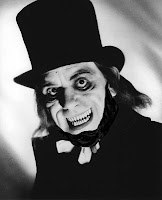 It's not out yet but IMDb has 916 users who rated the Spielberg film "Lincoln" an aggregate 7.9 stars out of 10.

How do they do that?

An unfinished version of the film was shown in NY recently. Here's the report, here's a review.

Lincoln isn't as sentimental as you might expect from Spielberg ... Lincoln veers too often toward becoming a somnolent period piece ... Though it might have worked better as a tighter, purely political thriller...

Not as bad as the trailers suggested but not interesting enough to watch again...

Maybe this is a template, Shakespeare for the Americans. Lots of shouting, arm waving, "scenery chewing." Why should a lot of out-of-control stage actors own all that excess?

(Lon Chaney Sr. would have made a great Spielberg Lincoln.)