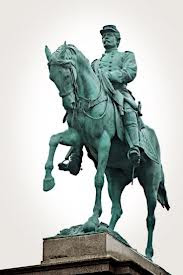 This blog was founded oh so many years ago in violent reaction to the low standards in Civil War history. Over the last decade it has stayed "on topic" - in other words, it has remained dour, pessimistic, bitter, and critical.

The next post will be number 4,000 and so I wanted to log a kudo to a field that may be unique in this one very important respect. Civil War history is powered by self-taught aficionados who do original research, publish books and articles, and search for the truth on a path by which they learn good historical practice, ethical evidence handling, and judicious evaluation. I am continuously impressed by the vibrant subculture. I am continuously impressed by amateurs who discover and maintain the highest professional standards.

You might even say that the ACW subculture is actually the dominant culture. That is very, very cool and what other scene can touch that?

I came to this field from from 20 years reading in modern European history. They don't have this. Their professional standards are infinitely higher than a McPherson's, but they don't have a vibrant subculture of independent researchers concerned with truth over narrative.

As the Internet and its manifestations enable one to break down "authority" with deeply researched challenges, the ACW buff is/was already there before the Web with pamphlets, tour guide spiels, roundtable talks, USENET posts, and the dark private mutterings issued over every primary source discovery that overturns conventional wisdom.

The ACW scene had all the potential of a self-policing discipline. My involvement with USENET and FTP in the mid-90s showed me the promise of a search for "new knowledge."

Today, we ACW readers have our professors, we have our Pulitzers, and God help us. So does every other corner of the historical publishing trade. Believe me when I say that absolutely everyone else has better of such than we - much, much better.

Nevertheless, we do love our few good professors (Harsh, Clemens, Simpson, Rafuse, Rowland, Reed, some others). And yet our real ACW juice is coming from self-taught scholars who are concerned with the ethical treatment of sources, contradictions in the master narrative handed down from the Centennial, and concerned with new research. They are enabled by small publishing houses, self publishing technology, and the Internet with all its publishing ramifications.

The headlock we as ACW readers have been held in from the nightmarish 1960s until the founding of this blog has been broken through the efforts of the self-taught researchers following moral rather than narrative compasses. They have been aided and abetted by the Savas-Beaties of the world and by other independent and adventurous publishers, often university presses.

Unless the day comes when we readers get swamped again by another tidal wave of ignoramus readers inspired by some future Ken Burns' "Civil War" schlock or by a pulp novel bestseller like Michael Shaara's "Killer Angels," we should do well. We deserve to do well.