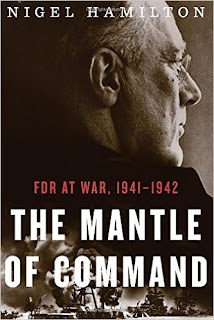 Thirty years after enjoying Nigel Hamilton's three-volume Montgomery bio, it was a pleasure to meet him in the flesh at the Army & Navy Club where he spoke of his new book last night.

This is a revisionist presentation of FDR and it appears Stimson and Marshall, among others, are going to take some hits.

I only mention this social affair because in the Q&A, perhaps three of the six questions pertained to the Civil War.

Those questions came from an entirely non-historical mindset. They were questions from ACW literature, not history, they were based on fanciful memes and Hamilton, and actual historian who does research and tries to solve problems, adamantly pushed back against them.

My regret is that he pushed against the memes themselves rather than the mindset that reads history this way. As a polite man and as a guest in a special setting, perhaps he needed to hold back a little.

The questioners were trying to understand FDR against the notion of Lincoln finds a general. One fellow actually broached the name of T. Harry Williams.

Hamilton vigorously countered that in no way was FDR a passive, hands off president looking for someone to carry major decisions for him. (I do like the implicit Lincoln criticism here!) He gave many counter examples to this. It seemed the questioners were a little disconcerted by his repeated assertions on this point.

Hamilton seemed familiar with the ACW literature (at least the Centennial stuff). He also shared with us some nice first-hand Monty and Churchill anecdotes.

I could have tied things up with a query of my own: Do you think Churchill indulged Monty out of the Prime Minister's personal conviction that Lincoln had done an injustice to McClellan?

That particular ACW question would have been too arcane for the occasion.