Political generals then and now 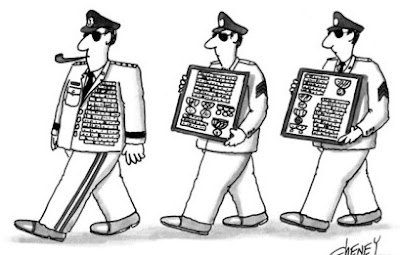 Reading a newspaper article today on a couple of sitting generals (called in the report  "toxic," and pawns of the White House) got me thinking about a difference in types.

Our modern chateaux generals are creatures of specific politicians with no political force of their own. There are a number of Civil War generals who were political in just that same, simple, one way.

However, most of the political generals labeled as such in the Civil War were political figures in their own right and although many advantages of appointing them are beginning to be discussed, one thing they delivered is never mentioned.

Years ago, going through the Democrat papers of that day while in Boston's main library, I was struck by the obsessive amount of reporting on Ben Butler's little commands and their doings. Every day brought a substantial report, often outweighing the combined war news of other commands. All operations were painted in the most favorable light and overshadowed news of any contemporary battle elsewhere.

This kind of hometown bias gave Lincoln's Administration a glow in newspapers that would be ill disposed to him otherwise. The ongoing publicity payoff for these kinds of appointments must have been much higher than for appointing Cabinet officials from this or that place.

Does any newspaper follow the doings of a general today? The generals are disposable, anonymous salarymen, from nowhere, going nowhere. Their political utility is simply that of delivering political outcomes and complementing politicians' analysis and aims.

A president might do well to appoint actual politicians (or celebrities) to some high commands, following Lincoln in this.