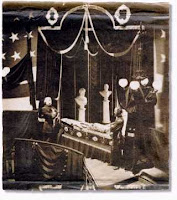 As an historical event associated with this week, Lincoln's death (April 15) is at the tipping point and may disappear. The week is taking on an entirely different significance.

"Booth immortalized himself by staging one of history's greatest dramas," Kauffman writes. "In the process, he accomplished what every actor aspires to do: he made us all wonder where the play ended and reality began."