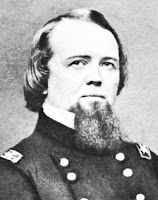 September 5th passed and I missed commemorating the 150th anniversary of John Pope being appointed commander of the Union armies to oppose Lee's invasion of Maryland.

Shame on you. Here I go starting a blog to keep you out of the sewer of pop history and you continue to wallow. Sears writes so well! Catton is so inspiring!

Wake up, reader. (I'm trying to be positive here.)

On September 5th, 1862, George McClellan, charged by Halleck with designating a commander of the field army that would oppose Lee, ordered John Pope to the field. Lincoln wanted Halleck to take charge. We know how that worked out. Lincoln and Halleck then tried to get Burnside to take the job but Burnside demurred. GBM learned of the demurral and appointed Pope.

Please look it up in the OR. Please. That act will make you smarter than 99.5% of all ACW historians who ever wrote about this period. Rafuse excepted.

Notice, in the OR, the flurry of messages from John Pope indicating a tantrum after McClellan's appointment of him. He is beside himself at being ordered to take his army against Lee. This is what gets him relieved - not the defeat at Second Manassas - the tantrum he threw at being appointed commander of Union forces to lead what we call the Maryland Campaign.

I'm sorry our favorite pop historians know nothing of this but you can fix that by reading the OR.

With the consecutive refusals of Halleck, Burnside, and Pope to take to the field, McClellan himself takes field command contrary to Halleck's orders that he stay commander of the DC area only. This is how the Maryland Campaign began.

This campaign teaches us many things among which is the quality of Civil War history.