Recycling the Grant craze of 2004

When Michael Korda's Grant biography popped out of the Grant publishing geyser of 2004, chances seemed remote that it would ever make it to paperback.

Sales were lackluster. Reviews were crippling. Mistakes abounded. It was derived entirely from two previous pop histories. Even the title was lifted.

It seemed a Christmas stocking stuffer cranked out by a Simon & Schuster lifer in the context of corporate  revenue targets.

Not paying much heed, the paperback edition slipped by me in 2009. S&S had unloaded the rights to Rupert Murdoch's HarperCollins where it became a "bargain book" under the Perennial marque as part of a bio series. If you look at the positive reviews on Amazon, they are quite naive, smacking of the innocent and ignorant. Veteran readers are more inclined to comment, "the book reads, as another reviewer said, like a high school term paper." 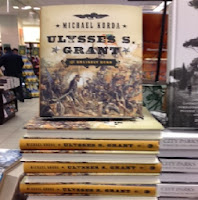 Author Russel Bonds was recently browsing a B&N when he encountered this display of a new edition of Korda's Unlikely Hero. This is an illustrated edition, again put out by HarperCollins. As with the first edition, this is just in time for Christmas.

The venue for the display piqued my interest because the book you see displayed here is not for sale on Amazon, nearly as I can tell (Amazon carries only the old bargain book and that is only offered through third parties). Amazon tends not to carry the books of the publisher known as Barnes & Noble (search for them - I find only third parties selling B&N titles on Amazon). A little rivalry, etc., etc. But this embargo is not applied across the board to HarperCollins.

One wonders if the Korda reissue is hampered from being on Amazon by some sort of tie-in with B&N. Perhaps S&S sold the rights to HC with a B&N distribution caveat based on who knows what corporate machinations. In any case, the brief book is expensive ($35 list) and Korda's author page on S&S makes no mention of it, so it's not a joint publishing deal.*

The B&N reviewers seem of the same mix as Amazonians, with kudos coming from naifs ("It was interesting to learn about the essence of US Grant in a mere 176 pages rather than having to wade through a much larger book") and brickbats coming from veteran readers ("I would recommend this as an introductory biography of GEN Grant for middle school readers").

Before taking our leave of Unlikely, let's check in on the in-print/out-of-print status of the rest of the Grant books circulating in 2004.

Note: The out-of-prints are available from third party sellers, of course.

Afterthought: You look at this list and you wonder how the similar Chamberlain craze played out.
---

* This author page is remarkable. Consider that this man worked for decades at S&S and this is what they gave him.