And the wind keeps going 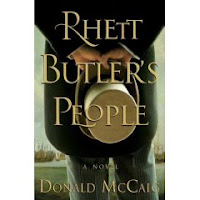 Another Gone With The Wind book sequel is scheduled for release in November: Rhett Butler's People. The New York Times notes that

When Alexandra Ripley's "Scarlett," the first sequel, was published in 1991, it was a blockbuster bestseller - it has sold more than 6 million copies worldwide - but suffered a critical drubbing.

You might wonder why an author who sells six million tomes is not re-engaged.

Well, it seems the Mitchell estate has editorial authority over the "product." One author's output has already been spiked.

[The] contract specified that she [author Tennant] retain Mitchell's tone, vision and characters. It forbade Tennant from including "acts or references to incest, miscegenation, or sex between two people of the same sex. When Tennant submitted a 575-page manuscript, entitled "Tara," the lawyers for the estate and editors at St. Martin's thought it was too British in sensibility. They fired Tennant and legally prohibited her from ever publishing her manuscript.

There may be more story in the making of Rhett Butler's People than in the novel itself.