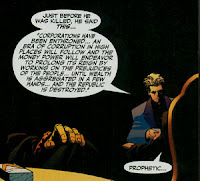 Friendly, active, Civil-War-content-rich blog Elektradig has read Andrew Ferguson in the pages of the WaPo.

"I see in the near future a crisis approaching that unnerves me and causes me to tremble for the safety of my country. As a result of the war, corporations have been enthroned and an era of corruption in high places will follow, and the money power of the country will endeavor to prolong its reign by working upon the prejudices of the people until all wealth is aggregated in a few hands and the Republic is destroyed."

Ferguson debunks the quote using the newly invented WMD rule of rhetoric - if I can't find it, it was never there. (This is an inversion of Rumsfeld's favorite archaeology bromide, "Absence of evidence is not evidence of absence.") He points to the Lincoln letters online as a resource.
A lot of people followed Ferguson off that cliff: see here, here, and here for starters. The issue is not that Ferguson is wrong but his methods are wrong.

To make sure it is fake we have to strike at the actual citation. Ferguson did not notice Al Gore's end note: Abraham Lincoln, "Letter to Col. William F. Elkins, Nov. 21, 1864," The Lincoln Encyclopedia, ed. Archer H. Shaw (New York: MacMillan, 1950), p. 40. This blogger did. So also others. But none went deeper into the Elkins letter issue; they declared victory and closed the casebook simply because Gore cited an authority.

The people interested in validating this quote publicly cited this source long before Gore came on the scene. See here, for example. The debunking of the quote thus must begin with that source. That Ferguson failed to do so suggests he is not familiar with the controversy surrounding the Elkins letter. Odd for a self-styled Lincoln buff, but in character for a journalist.

Snopes.com has something to say about this. We can expect journalists like Ferguson to be unfamiliar with Web landmarks like Snopes: what is shocking is the number of bloggers who failed to check in here and then retool their arguments. The gist is here, even if we want to know more about the forgery aspect:

Pedigree for this quote is often asserted by pointing to the 1950 Lincoln Encyclopedia, compiled by Archer H. Shaw, which "authenticates" the quote by citing a purported 1864 letter from Lincoln to one Col. William F. Elkins found in Emanuel Hertz's 1931 book, Abraham Lincoln: A New Portrait. However, this source is fraudulent: Hertz was taken in by a forgery, and Shaw, a sloppy compiler, added the bogus letter to his encyclopedia

Read the whole entry.
p.s. On the same topic, how do quotes of actors portraying Lincoln on Star Trek migrate into folklore as actual Lincoln quotes?