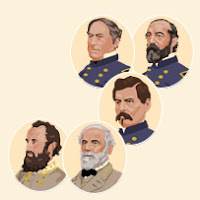 European game developers have released a new ACW strategy game, American Civil War: The Blue and the Gray, which is available through the Web. A downloadable demo is available at the linked site.

One feature interests me especially [text edited from Frenglish]:

Units can be organized into brigades, divisions, corps and armies. This will depend on the nation’s military structure, as well as the presence (or absence)of a leader of appropriate rank. Armies [get] combat and march bonus[es] as well as some of the abilities of the overall commander (hence the interest of having a competent general at the head of key armies). Player[s] will have to promote the right leader at the right place, paying a political cost if more senior leaders are [passed over] without command.

This reminds me of Britannica's Civil War game from 25 years ago, No Greater Glory, where every passing over of rank was dealt a political shock. The game notes continue,

With only a few but well integrated and explained constraints, this optional rule will let players experience how generals like McClellan influenced the outcome of the war.

The designers have set McClellan up with the lowest ability rating and woe unto the player who tries to relieve him. See this list for the gory details.
Another interesting feature is the provision for French, British, Indian, and Mexican units in play. There must be triggers or random events at play here.
One aspect of the game Civil War buffs are bound to hate: supply lines.

Players must supply their units either through foraging or by building and maintaining supply lines, depots and wagons. Supply lines and depots are expensive to build and must be defended (or they will be captured or pillaged) and thus players must plan their deployment very judiciously.

That would be my favorite part, actually.