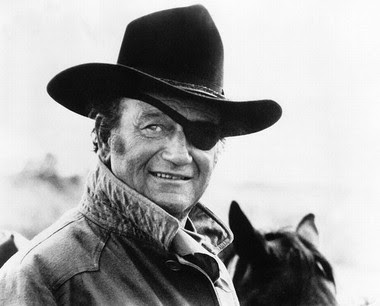 Can't say enough good words about the American novelist Charles Portis. Your general Portis novel is a series of Tristram Shandy-like digressions in monologue aimed at the literate reader. I think Laurence Sterne called them "progressive digressions." Very funny stuff and magical in a wordsmithy way.

Portis's most famous novel True Grit, however, combines very tight (pulp fiction type) plotting with all the stylistic Shandyesque humor you can stand. It's a book you can finish in one sitting with a "wow" setting that passes from front to back.

The idea of making Tristram Shandy or True Grit into movies has always made me confused and unhappy. Sort of like "I'm going to make this TV show out of this radio show," etc. The magic is in the source medium.

Nevertheless, two movies have been made of True Grit and good luck to the Portis estate in this. I thought you might like to know about the fictional character of Reuben "Rooster" Cogburn:

- Rode with Quantrill and Bill Anderson
- Participated in the Centralia massacre
- Knew the James brothers, though not Jesse
- Welshed on his loyalty oath
- Robbed a Union payroll after taking the loyalty oath
- Obtained federal marshal appointment through a friend who knew Jo Shelby

Maybe this was exposed in the movie sequel that I haven't seen yet.

Even the better literature holds some Civil War content.