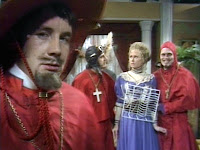 What is an historian? Harry Smeltzer and Eric Wittenberg tried to settle the issue some time ago, but I have a different approach.

I would like to suggest that universities immediately purge all faculty members whose entire published work consists of pop history. If you write pop history, you are not advancing knowledge in your field. You are entertaining Those Who Haven't a Clue. We all know that.

There was a time when I didn't have a clue, but the people who clued me in were not given tenure or prizes.

Anyway, this would be the first purge. We would not be done purging. The second purge would be launched when professors least expected it, because no one expects the Spanish Inquisition, and that should be our model.

The second purge would be of professors who had some scholarly publications but who were generally known for their pop culture writing or for their celebrity appearances on NPR, PBS or other middlebrow venues.

One would like these dismissals to include hurtful and insulting language, but we can't control that. That is up to the purgers and no purge is perfect.

There would be a third purge and ideally the purgees would be thunderstruck, so sudden and unexpected would this purge be. These would be the students of the purged professors, specifically those students who showed a marked affinity with pop history and storytelling.

Some scholarly students will get caught up in this purge through no fault of their own, just because they were mandated to take a course given by a pop history professor. Such tragic loss is well worth the greater good.

To launch these purges, we will need political backing greater than the purgees can muster. I suggest the following:

- The combined tenured salaries will be divided among pop historians who stay out of history faculties.

- Scholarships will be given to young scholars to study history rather than tell stories.

- Students enamored of pop history will be given scholarships to teach creative writing.

This seems a humane yet stern solution to our pop history problem. Join me in this initiative, won't you?