Buchanan and the inevitability doctrine 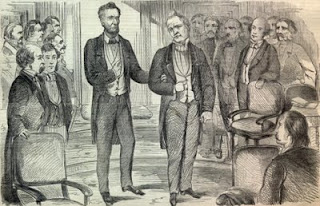 This blog carried a post on how Buchanan's reputation reaps little gain from the Centennial doctrine that the war was inevitable. Mitch Hagmaier writes

I had a kid submit an inevitability & Buchanan paper for this year's History Day state semi-finals. He did, in fact, argue that Buchanan was blameless due to the whole Centennial "irrepressible conflict" line of argument, and generally blaming every negative event of Buchanan's term on somebody other than Buchanan. Shame he was more interested in the Sumner-Brooks beating & taking his analysis from contemporary political cartoons than in discussing decisions which Buchanan had actually made, but at least he took a slightly different tack than the usual line.

He's picking something up from pop political culture, I think: any accusation made against your guy can now be refuted by means of rationalization (or charge of hypocrisy). Could be the wave of the future in history...

When I saw what they had done to her book, I felt the same sentiments author Victoria Bynum expresses here:

I had asked earlier how a the head of a Harvard department could do scholarship such a wrong. Sally Jenkins now stands a good chance of being profiled by the Cambridge police.

This blog got ahead of the New York Times, but the Times has caught up (and passed me) in grand style. Click the first link.

The genesis for a book

This is one of the oddest origins-of-a-book story ever.

A director is shooting a film.

He creates a team of two authors to write a book about the film's subject.

The authors enter a specific, deeply plowed ACW history field to compile a rockem-sockem narrative on the QT with almost no research: "we spent a number of weeks in Mississippi together, filling in holes in the research [!] and borrowing groundbreaking material from Jim Kelly, who is writing his dissertation on the subject."

Weeks of plugging and borrowing. You see, the research has been done to death, including in a trade hardback I reviewed 10 years ago which they disparagingly call an "academic monograph". The holes are to be plugged in other people's work and augmented with a new dissertation by a student.

The authors include a sportswriter and the chair of a Harvard department.

In addition to cranking out hit history titles, sounds like these two could run a pretty good whorehouse.

A surprising number of ACW bloggers had books out this summer.

Eric Wittenberg's Like a Meteor Burning Brightly: The Short but Controversial Life of Colonel Ulric Dahlgren was scheduled for release June 11 (by Amazon's reckoning) but was still in production as recently as July 10. I'm really looking forward to the accounts of political intrigue in this one.

I missed the release of Scott Mingus's book in March, Flames Beyond Gettysburg: The Gordon Expedition, June 1863. Hmm: Confederate general training militia on the march during and for an invasion of the North. Narrative history doesn't get much better than that. (Hat tip to Eric W for mentioning this.)

Brooks Simpson has put out his Civil War in the East 1861-1865: A Strategic Assessment. The publisher says, "At a time when the telling and retelling of the military narrative approaches Norse saga, Brooks avers that it is essential to question conventional wisdom, especially when it is questionable wisdom, without giving way to pure contrarianism."

J. David Petruzzi and mapmaker Steven Stanley saw their Complete Gettysburg Guide released by Savas-Beatie last month. This is a full-color production on slick paper with maps of the same quality as CWPT distributes in its mailings.

Back in April, Steven Woodworth issued a collection, The Shiloh Campaign, which included a piece by his co-blogger Brooks Simpson as well as Savas-Beatie author Timothy Smith. 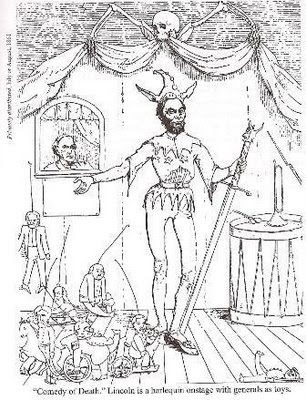 (Topside: Lincoln's Comedy of Death, a privately circulated cartoon scanned from the book; it's typical of the author's original research and good eye.)

Ted Savas knows what to do with interns - make 'em blog! And boy, does Parul Guliani blog. Let's see if I can get my summer-soaked attitude adjusted and inspired...

After a lazy hiatus, this blog will be looking like Drew's for awhile as I plunge into the pile of books accumulated in the last weeks.

Perhaps they were waiting for better weather, but a surprising number of venues postponed their Bicentennial observances from February to July 4. The weather was fine in some places, worse in others:

Rain didn’t prevent Abraham Lincoln from making a Fourth of July visit to downtown Springfield. Lincoln impersonator Michael Krebs was one of a large group of entertainers who performed Saturday as part of the Capital City Bicentennial Celebration ... Because of the wet weather, many entertainers had their performances moved ...

Notice how the writer conflates the performance of a vaudeville bit with an actual visit by the historic Abraham Lincoln. I guess history is the big winner when (similarly) an eight-year-old in Philly mistakes a re-enactor for an historical person:

There was not enough bad vaudeville availble to Sparta, Indiana, so Kiwanis there decided that "Children who dress-up like Abe or his wife, Mary Todd will be admitted to the park for free." This will help them get past the image of the man to penetrate his historical meaning, perhaps.

In Philadelphia, the art club Dumpster Divers strewed trash across damaged plywood on Independence Mall to "honor Abraham Lincoln's 200th birthday." Sensing the kitsch imperative behind every Lincoln project, a spokesman said "Originally I wanted to make it look like Abe Lincoln's hat" but gave up for technical reasons. He was careful to use the word "whimsical" instead of "kitschy" but of course the "trash" content of the exhibit is immutable.

Another artist, Wisconsin cheese artist Troy Landwehr (top photo), sculpted a Lincoln form out of a 1,000-lb block of cheddar with the full weight of the task in mind: "I think it's a big honor to carve Lincoln." He did not take this honor lightly: "It's a lot of research."

When the figure was moved to Washington, hot weather and jostling caused the cheese head to roll off:

Landwehr couldn't salvage the stovepipe hat. "But we saved his face," the sculptor said. "He's OK. He's back to standing tall."

He, not "it." For you see, Joey, Lincoln has become a spirit that inhabits trash, kitsch, bad lectures, and vaudeville schtick.