The conference report, scheduled for a final vote in both chambers later this week, includes $9 million for the Civil War Battlefield Preservation Program...

This 111-316 seems to be a fairly generic funding measure for certain departments - perhaps it will be controversy free. The "Civil War Battlefield Preservation Program" in question appears to be the LCWF's which uses income from leases rather than tax money. It buys land outright and it purchases easements.

Lincoln's books - where to get them?

We've all read Lincoln books, but few of us have ever read Lincoln's books. According to the new head of the National Endowment for the Arts, we're missing some good reading:

This [Barack Obama] is the first president that [who] actually writes his own books since Teddy Roosevelt and arguably the first to write them really well since Lincoln.

Well-written books by Abraham Lincoln: the NEA should make these better known.

p.s. I'm counting up presidential book authors between TR and today and am coming up with Wilson, Hoover, Nixon, Carter, and Reagan (omitting ghost-writing done for Clinton, JFK, and Ike).

If the new head of the Nuclear Regulatory Commission showed not the slightest familiarity with his field, it would matter. If the head of the NEA speaks of Lincoln's books and the last presidential author being TR, that should matter too. History may be parked under the NEH, nevertheless...

An author of history-based fiction responds to criticism:

... the only requirement is for conjecture to be plausible and grounded in the best facts one can get. [...] What really disconcerts commentators, I suspect, is that, when they read historical fiction, they feel their own lack of education may be exposed; they panic, because they don't know which bits are true.

Went to Rehoboth Beach a couple of weeks ago and saw the new paperback edition of Betsy Rosen's Hallam's War on display at a shoreside bookshop. Congratulations, Betsy!

(Visit beach = go to bookstore on the beach = vacation)

Drove my bike from Point of Rocks to Harpers Ferry on the canal path yesterday (loose clothing, no helmet, smoking) and noticed HF was jammed compared to the previous nice weekends - more crowded than a summer's day. Must be the John Brown Sesquicentennial pulling them in.

I fortified myself for the return trip with a stout at The Secret Six tavern, then wondered if I had thoughtlessly commemorated the raid by my careless actions.

Acquitted myself with the argument that I would have done the same any year. A pumpkin ice cream cone quickly erased the sordid memory. 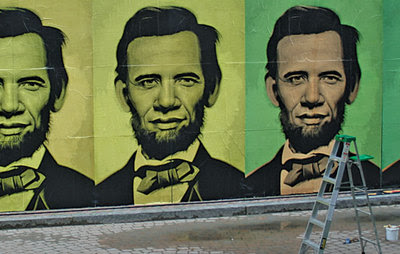 Post election, there were a lot of Lincoln/Obama parallels drawn. If McChrystal is relieved immediately after the November elections, we'll have another one.

Dr. Latschar is gone, leaving us this startling quote:

"I never ever, ever searched for group sex or bestiality."

CWPT's Hallowed Ground is a newsstand-worthy glossy mag that you won't find on newsstands. You get it the in the mail if you are a member. (In my case, I recently got two back issues instead of the current issue. Perhaps those are the just desserts for all who join at a discounted member rate.)

The magazine is online and there you will be able to access quite an interesting interview with Larry Tagg. Or not - the link is broken. [Update 10/26: fixed here.] Let me reprise the key Q and A here:

Q: There are hundreds of Lincoln books out there. What makes yours [The Unpopular Mr. Lincoln] different?

A: I continue to be amazed that nobody has written this book before. Every book about Lincoln makes occasional mention of opposition to this or that policy, but there has never been a full treatment of the length and breadth of that opposition, which was so vehement, so relentless and so ubiquitous - coming from all sides, Republican as well as Democrat. My book goes against the grain of mainstream Lincoln literature, which almost invariably takes a reverential tone, and leaves out the rabid ravings of the opinion-makers of the time. This conventional treatment has left the false impression that Lincoln governed from strength, when the more interesting truth is that he accomplished so much in the teeth of violent dissent. To me, this adversity is what makes Lincoln great.

I might have phrased this differently, with a Tolstoyan filter: It is what makes Lincoln (to me) so interesting as an historical figure, this lurching and stumbling through innumerable blunders, this squandering of goodwill in every personal relation, this functioning out of a matrix of systemic personal, physical, and political weakness with monumental results to show for it.

Lincoln offers - in my view - an inescapable historical lesson in counterintuitive results (style, capability, efficiency vs. outcome). I personally credit a lot of the Lincoln criticism, Democratic and Republican, and wish to stress that in a news-driven culture, it is quite natural for a public to seize on every error, compile a bill of particulars, and update this list with each headline, rumor or editorial. The impression of incapacity will be "logical" and justified but the trees obscure the forest for great and transcendent results can emerge from the smoke of daily accidents and bad choices.

Can Lincoln's incapacity coexists with a greatness of legacy? To me, obviously. It did and does. The record is indisputable, but subjected to interpretive rationalizing by simplifiers. His critics were not fools, nor were they delerious. But in the current mainstream Linconology, the record must be rewritten, errors righted, wisdom discovered, and Lincoln's critics silenced or demonized. Modern Linconology cannot extract greatness from weakness.

I am often amazed by deep Civil War readers/authors who cannot articulate the War Democrats' hawkish indictment of the Lincoln Administration circa 1862-1864. The Peace Democrats have constantly been brought in to distract and confuse. Not knowing the War Democrat position, not suspecting hawks savagely critical of Lincoln's softness-on-war, McClellan's candidacy is a mystery to readers because in a grotesque projection of Centennial "history," they subscribe to associations of the McClellan candidacy with peace and (anti)emancipation issues. Tagg's book can start to correct this.

Lincoln was McClellan's employee before the war, McClellan was Lincoln's employee during the war. This reminds one of the sides of a coin; each operated under amazing handicaps, each producing dramatic counterintuitive results. Lincoln and McClellan, historically, were aspects of the same paradox, one beyond any who have not drunk deeply of Lincoln criticism.

We know the McClellan criticism by heart. Learn the Lincoln criticism. Take the Tagg book as a starting point for your own investigation into contemporary views of this very interesting politician. You don't have to give up your warm and fuzzies - but you have to get away from the ahistorical mainstream of Linconology.

p.s. It may be helpful to read Hans Trefousse in conjunction with The Unpopular Mr. Lincoln. Trefousse is at one with Lincoln's critics on the left but he crafts his narratives such that Lincoln is able to escape censure on most Republican controversies, leaving the "traditional" reader with an icon intact and a deepened appreciation of and sympathy for progressive animosity towards this secular saint. On the other hand, to get a full grasp of the War Democracy's frustration with Lincoln, you'll eventually have to read the papers of that era after time spent with The Unpopular Mr. Lincoln.

p.p.s Jim Campi wrote a nice note to say CWPT uses different mailing services which can affect when and how the magazine is received.

Dear Abby: My husband and I are Civil War re-enactors. (My husband is a cannon soldier and I am a nurse re-enactor.) We would greatly appreciate it if you would remind your readers that if they come to any of the re-enactments to please not talk to the participants while they are firing weapons in "battle" because it could distract them. Something could go wrong and they could be badly injured. Thank you, Abby. -- CIVIL WAR RE-ENACTOR IN ELMIRA, N.Y.

Dear Re-enactor: Some people want to engage with history, others are content to be entertained. Let's encourage engagement. Fire your guns during private moments alone with friends - your mission publicly re-enacting is not about firepower but history power. - Dimitri van Buren

WaPo puts the squeeze on Latschar

Gettysburg Park super John Latschar will feature in a great many blogs this week, so let me facilitate with a roundup.

Sept. 17 - Latschar cleared of 17 allegations by a DoI IG report. ("...we discovered no evidence of criminality or conflict of interest in contracting practices providing construction management services for the museum and visitor's center.")

Oct 16 - Latschar wins National Trust prize (his "contributions to historic preservation cannot be overstated.") He is a no-show.

Oct 19 - WaPo: "Report ignored explicit images found on park official's computer." ("The Inspector General's Office would not comment on why the findings of Latschar's improper use of his office computer were omitted from the report.")

It was a year ago that Eric Wittenberg denounced Latschar's proposed move to the Gettysburg Foundation, a move that would have jumped his salary by $100,000 - a move the WaPo now says was put on ice when the super learned law and policy "would prohibit him from performing many [Foundation] job duties, including 'any communication to or appearance before an employee of the United States.' " Eric is the first to weigh in on the new revelations.

Novus Livy at Gettysblog was happy last month when Latschar was cleared; he views the Gettysburg Times as ginning up fear, uncertainty and doubt about the super. He'll not be happy that WaPo has intervened. He and Eric hold reverse sides of the question.

Myself, I got roughed up on USENET a few years ago discussing Latschar's brainchild, the public-private partnership (hate it).

WaPo reports that as of today, Latschar remains at his post. Russell Bonds sums it up:

Another ill-advised "frontal assault on the breastworks" at Gettysburg.

p.s. BTW, Latschar's retirement and assumption of Foundation duties remains on the NPS website even today. No footnote, no redaction a year after the non-event. Perhaps the webmaster needs a public-private partnership to update some information.

I never had much use for John Keegan except to enjoy his work as one would op-ed pieces. The views are occasionally enjoyable but the level of generalization (coupled with a lack of historic sensibility) will eventually irritate the careful reader.

I mentioned here some years ago his starting the American Revolution on the wrong year (and then, McPherson-like, defending the factual error on literary grounds). Here are a couple of typical annoyances culled from a NYT book review of his new The American Civil War:

Because the South had few if any large cities to attack, Mr. Keegan notes, its army “presented itself as the only target at which to strike.”

Which ignores other geography, such as fertile valleys, railroads, rivers, and the forts guarding same.

“Southern women are a distinctive breed even today, admired for their femininity and outward-going personality.”

The generalist observes no limits in generalizing.

The linked review is friendly but negative.

Refreshing! Reporter uses the word "cannonball" instead of "bomb," "grenade," "shell," or "explosive." Big city reporters may be trainable.

Meanwhile, what are the chances that alcohol was involved in this accident?

The Lees of Stratford Hall

Quite a long and good article here on the Virginia Lees and their ancestral home, ending with notes on Robert E. Lee. (BTW, there is a contemporary house of similar magnificence erected by the Maryland Lees that sits near Crampton's Gap in a lovely grove.)

Clark Kenyon has sent a card to his mailing list announcing the closing of Camp Pope Bookshop as a retail operation and the staging of an inventory liquidation sale starting October 15 at www.camppope.com. On Nov. 15, when the sale ends, the website will present Camp Pope publishing (his marque's own books) while offering publishing services. This after 20 years of direct mail retail ...