If you are an author with an interest in ebook sales, do visit Hugh Howey's Author Earnings website. The data is a black box extrapolation but interesting for being indicative. 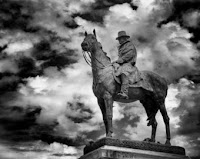 This revision of Grant’s biography delivers it in a narrative form packed with 103 pages of notes, 37 of bibliography and an historiographic essay. Author Joseph Rose says


The investigation of various controversies in Grant Under Fire may look positively one-sided , but this is an exposé. In earlier biographies, much of what passed for evidence and argument on General Grant’s behalf was improbable, strained, and often downright wrong ... Mostly, Grant’s blunders and unpleasant personal characteristics have been ignored, misconstrued, distorted, or denied. This work subjects both the primary sources and these earlier interpretations to a fine scrutiny. The arguments presented here identify the historiographical weakness of the previous works and offer a more reasonable analysis, based on a wide range of available sources.

This is done with great force and also humility:


... there are so many sources still unconsulted and so many of the extant sources contradict each other, information is sure to come to light modifying or overturning many of the facts and conclusions stated here. [...] I do ask the reader to point out any and all mistakes and make suggested corrections, as appropriate, on the website grantunderfire.com.

My own disadvantage in reading works like this is that I lack grounding in the primary sources of late war controversies; however I can say that Rose’s evidence handling impressed me as did his grasp of the material. We are in the hands of a fair, informed and intelligent author who delivers a compelling read. Some controversies here are a thinner than others, however the general picture is consistent, thorough and credible. Grant seems nothing like what the current consensus makes of him. As Brooks Simpson pointed out in Let Us Have Peace, Grant had highly developed political sensibility; some of that is on display here, but so is the political bubble constructed around him by Elihu Washburne and others and that bubble was needed to preserve the general from repeated errors of omission and commission -- one might almost say from a self-destructiveness.

This was my summer reading and hard to put down. Highly recommended as an antidote the general Centennial consensus and as a fine piece of historical research and writing.

Update: Harry has an interview with Joseph Rose.

I was touring Montpelier Saturday with a Midwestern group.

Tourist:  Why should Dolly Madison be considered the first "First Lady" when Abigail Adams preceded her in the White House?

Guide: Abigail Adams hung her laundry to dry in the White House parlor!

Tourist: Well, she was a New Englander!