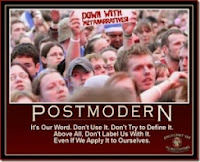 For at least a decade, regimental histories, diaries, memoirs, and letter collections have dominated the titles published in Civil War history, joined lately by "memory" books. These were originally sold on their own merits - the light they shed on events.

Someone got the idea that in their specificity these kinds of books cannot appeal to the general audience. They need a broader, new "angle." This someone tends to work in marketing departments.

Now there is a framing of works in pomo terms of market: race, class, gender, etc. When you pick up one of these titles, heavily promoted for contemporary relevance, you are always surprised (possibly disappointed) to see that the book is the same thing it would have been if no marketers had ever existed and no postmodernism had ever been evoked.

It is as if the authors wrote the books they wanted to and the marketers dressed them up as something else.

Postmodernism is entirely analytic. The amount of analysis in these Civil War works hovers just above zero. But a pomo work takes the record as a starting point and then elaborates interpretations. Those elaborations are the gist of the book. But in our Civil War diaries, letters and memoirs, the diaries, letters and memoirs tend to be the whole story and are left to interpret themselves.

I have at hand two randomly chosen examples, both from university presses.

The first is A New Southern Woman: The Correspondence of Eliza Lucy Irion Neilson 1871-1883. This is edited Giselle Roberts and her being credited as an editor is a tipoff that she subordinates herself to the underlying material. We have a second clue as to the editor's historical (not pomo) intentions in the title A New Southern Woman as it alludes to the New South, a named historical period. Here, it seems, we will meet a woman representing her era. Standard stuff.

Now let's look at the dust cover, back blurb: "... it provides new insights into the effects of the Civil War on the lives of elite white southern women..." From the inside jacket: "... by celebrating both the traditional and nondependent ideals of womanhood, they [the Irion women] made a dynamic contribution to the creation of a New South." From the Introduction:


With their exclusive claims to political power in tatters, defeated Confederate soldiers redefined their masculinity and racial supremacy around domestic virtue and governance. Without slavery, marriage became the legal crucible of the postwar household and the lifeline available to white men in their struggle to regain their independence and public prowess. [...] To rebuild demoralized soldiers ... southern women subordinated themselves within the domestic sphere to become the last legitimate terrain of domination for their men.

Whatever you think of the foregoing, it disappears into the smoke of Mrs. Neilson's long, frivolous, personal, chatty letters without so much as a pomo footnote or analytic editorial aside to disturb any experience of a conventional collection of letters. Here's a random example (emphasis in the original):


Are you alarmed at this mammoth sheet of paper?; & do your eyes hurt in anticipation of the task of perusing its many lines? Well! I don't wonder if neither of the two feelings should fill your breast - but this I will promise, - not to write any more than I can possibly help, & to write it "werry loud," so that your poor eyes won't suffer any more than absolutely necessary! - I could find no other paper about the house, & so was obliged to content myself with some of Mr. Neilson's account-book; for I could not postpone answering that precious letter of yours, so much wished for, & so eagerly devoured!

And so on for another three pages. The notes to this chapter give "werry loud" as a Dickensian allusion. There is no pomo content in the letter of the dozen or so endnotes. The whole book is a mass of nerve-wracking prattle. And yet this is womens' studies somehow.

A second example comes through the mail as Nature's Civil War: Common Soldiers and the Environment in 1862 Virginia. This is an interesting short work, perhaps the length of a long New Yorker article, and part of the interest is in its peculiar organization.

Young author Kathryn Shively Meier wrote it as a contribution to "environmental history" - she calls this the lens through which she viewed her historical work. She credits teacher Gary Gallagher for getting her original manuscript and ideas into this final form.

This lens of environmental history blocks out essential light. Meier addresses soldier health and how the environment affected that health with an entirely self-conscious purpose of excluding all medical history from her writing (although she does resort to medical data here and there). This is a contortion that keeps you reading. You expect she will have to acknowledge some standard works here or there but it never happens, generating quite some suspense.

In considering the effects of nature and the shaping of nature in camp life, if you wanted to limit yourself to that, there would be much to say nevertheless. But here we have just five short chapters, some topically peripheral: "Health and the American Population before 1862," "At War with Nature," Soldiers and Official Military Health Care," "Becoming a Seasoned Soldier," "Straggling and the Limits of Self-Care," and a conclusion.

The contents of these chapters is light, very much easy reading, and the effect on the reader is one of having a read a sort-of-interesting magazine article.

Ms. Meier wrote the book she wanted to write and then she and Gallagher formed its pieces into "environmental history." Which is not history at all but historicism, just as womens' studies is historicism.

But then neither is it "environmental history." It is an idiosyncratic book that has its own merits and demerits but one which has been dressed up as something it's not.

If you promise pomo, give me my pomo.

Consider the contrast drawn by Marx between "naive socialists" and "scientific socialists." There seem to be rigorous pomo writers and then a great flock of vague, loosey-goosey types. Our Civil War contingent seems to fall between the loosey-gooseys and the outright fakes.

A nice local piece summarizes progress in collecting bits of Shepherdstown land. Scroll down for the significance of the battle (cute).

In other news, Gateway Press announced via email today that University of Nebraska Press is picking up Gettysburg Magazine. Check out their want ad for an editor-in-chief.

Tourists are playing "catch us if you can" as Gettysburg park rangers are out in force to prevent park visits. A poster to a discussion board says, They

are rousting people and if they catch them more than once, they are citing them. Like it or not, it's trespassing.

Sounds like more work than leading a leisurely tour.

The official blog of the Gettysburg National Military Park has officially stopped posting as that could also be considered labor.

Chief Park Ranger Anthony Winegar stood guard at the entrance of the parking lot all day Tuesday, trying to keep park attendees from driving into the parking lot.

He was being paid that day to be an anti-park ranger. One imagines they'll send in the drones next.

It’s the one hundred and fifty-first anniversary of the Battle of Corinth and National Park Service employees were supposed to hold educational programs for visitors at The Crossroads Museum ... But we don’t have that right now...

Folks, we have to get all hallowed ground out of the hands of the federal government. That's a no-brainer.