An instructor long ago rejected a history paper of mine with the comment, "You are trying to write your way through what is an historical problem."

I was not arguing from evidence, I was stylizing and applying tricks and tropes to press a weak point.

See if you think this author is doing the same.

The point of Memorial Day 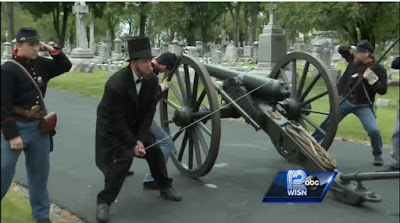 If it is the point of Memorial Day to honor all of the war dead, is it not wrong to honor only a portion?

With 364 days a year to honor the Civil War dead, why can't reenactors pause for a short while to honor the fallen of their own generation and others?

Local officials must show decency and strength by denying permits for these kinds of events on this particular holiday.

"Copying language from other sources"

A number of this blog's readers feel certain forms of plagiarism are "no big deal." The New York Times feels differently.

A reader noticed this editor's note in the Times [emphasis added]:


Two articles in this series last year, by the author Karen Abbott, copied specific language and passages from several books and papers. In most of these instances, the writer cited the sources in the article’s endnotes. However, copying language from other sources without proper attribution is a violation of Times policy.

The first article, about white Southern women during the Civil War, copied language verbatim from works by Catherine Clinton, David Silkenat, J. David Hacker, Libra Hilde, James Holland Jones and Mary Elizabeth Massey, and a volume edited by Stephen W. Berry, all of which were listed in the article’s endnotes. The article also copied one sentence each from James M. McPherson’s “Battle Cry of Freedom: The Civil War Era” (1988) and from Williams G. Stevenson’s “Thirteen Months in the Rebel Army” (1862) without attribution.

This is a cut and dried complaint: two sources got no attribution. Simple, right?

But if you look at the article, scroll down to the citations. Do you recognize the method? It is one used by Stephen Sears and other authors. They compile and write long passages of text marking them with a single endnote that leaves the reader guessing as to how to match material against sources. Our errant author takes this terrible, nonsensical practice to a new level by putting her whole article under this system, again leaving the reader to figure out what came from where. One reader apparently did and complained about the two missing bits.

Now, the  Times very overgenerously credits such disarray as legitimate attribution but blames the author for leaving two ingredients out of her hobo stew. The editor's note continues:


The second article, about The Soldier’s Friend, a New York newspaper for Civil War veterans, copied sentences verbatim from a book by Frances M. Clarke and a doctoral dissertation by Jalynn Olsen Padilla, both of which were listed in the article’s endnotes.

Note that the charge here is that the author reproduced text without quote marks and the citation of said text does not then wash away the sin of plagiarism. Many of you will consider this nitpicking - it is not. History is about the evaluation of sources and just weighing of evidence. When evil practices strip away our ability to judge the author on these criteria, there's no history there. It's mere nonfiction that violates even a newspaper's editorial policies.

The Times invokes the word plagiarism at the end of its note:


Editors at The Times learned of the problem after a reader complained. Contacted by The Times, Ms. Abbott said that it is common for historians to draw on primary and secondary sources as long as those sources are acknowledged. However, according to the American Historical Association: “Writers plagiarize, for example, when they fail to use quotation marks around borrowed material and to cite the source, use an inadequate paraphrase that makes only superficial changes to a text, or neglect to cite the source of a paraphrase.” Had The Times known about the copied language in both essays, it would not have published them.

If we look at the articles in question, this editor's note has been added to the end of the first article and the second. The pieces remain online and searchable. The author, Karen Abbott, will justly be shamed as long as these come up on the Web. And she will be shamed for practices milder than those of James McPherson, Jean Smith, and many other celebrated Civil War authors.

We Civil War readers need to contact the editors of newspapers who publish pieces and extracts from our Civil War authors and report plagiarism. We could contact book publishers too, but the effect would less and one wonders if the publishers even give a damn.