The Free State of Southwest Virginia

Hattaway and Beringer mention The Free State of Southwest Virginia in their Jefferson Davis book but I can find no trace of it on the WWW or elsewhere.

This site would have provided a natural home for it ... but no mention.

I was startled by the number of Civil War history memes found in Adam Zamoyski's Napoleon, A Life.

Marches
Recall a topic as trivial as the length and duration of a military march. Short marches infuriate Civil War authors, yet,


The Austrian Army operated like a machine, observing tested routines such as only marching for six hours in twenty-four.

Six hours in 24? In their marching, the armies of North and South outdid Bonaparte's professional nemesis time and again.

Cultivating the troops
Historians' accounts of soldiers' love for their Civil War generals feature McClellan and Joe Johnston. More ink is spilled on McClellan's techniques than Johnston's but both resonate here:


His treatment of the troops under his command had been designed from the start not only to make them more effective as fighting men, but also to turn them into *his* men.

He had developed a gift for talking to the men as equals.

While he tightened discipline, he took care to flatter the soldiers' self-esteem, making throwaway statements such as "With 20,000 men like that one could conquer Europe!" He described their feats of arms in superlative terms in his proclamations.

A mixture of growing self-confidence and the urge to earn praise fed their eagerness to live up to their expectations of them.

Political relations
One Zamoyski's threads concerns Napoleon's flattery of the Directorate. In our sphere, McClellan is best known for his private disdain for his political masters. But note that


He [Napoleon] had experienced a great deal over the past year, and had learned much about himself and others, about war, politics and human affairs in general. Most of it ... had lowered his opinion of human nature.

Historians give McClellan pride of place for antagonism towards an entire government and Joe Johnston gets a runner up spot for his antagonism towards a president. Yet historians tend to overlook McClellan's efforts to cultivate his political masters just as they cast a veil over Robert E. Lee's relations with Jefferson, whitewashing these as "close" or "ideal" instead of sycophantic. (Seek out all the flattery in Lee's communications to take your own measure.)

Meanwhile, if Grant seems apolitical, read Simpson's Let Us Have Peace. See also Meade's letter to his wife gloating that neither he nor Grant voted in the 1864 presidential election. That looks apolitical but shows disdain for both Lincoln and the Democratic ticket.


Bonaparte's despatches to the directory were no less hyperbolic. [...] At the same time he stressed his lack of equipment ... To Carnot he expressed his "despair, I could almost say my rage" at not having the tools with which to do the job...

Throne or scaffold
Zamoyski gives us a thought that sums up the fate of outsize military figures.


... one of the army victuallers ... wrote to a friend that he could see "no end for him [Napoleon] other than the throne of the scaffold."

In Civil War history, only three men made it to this crossroads: McClellan (scaffold), Grant (throne) and Lee (scaffold).

With the fall of Richmond, Jefferson Davis proposed to carry on the war in the style of the American revolution.

This is as much as we get from those historians who write past Appomattox and it leaves much to the imagination. The clarifying explanations are in the record, however.

As early as the fall of Vicksburg, Davis wrote to BG Reuben Davis (emphasis added):


I hoped that the popular confidence in Genl. Johnston would have given him large reinforcements by the uprising of the people. Why was it not so? [...] Let every man who can bear arms rush to the rescue. Regard the army as a nucleus, not as the force on which the country depends solely for defense.

Very helpful text and no great burden on the reader's comprehension, considering the light it sheds on this topic.

It seems a peculiar ask of Johnston, though, to have him organize a mass uprising. IIRC, he and Beauregard, with "large reinforcments" of  Virginia militia at their disposal, had them dig trenches at Centreville. This particular "armed uprising of the people" finished Bull Run as laboring bystanders.

It also seems odd that Davis, whose government by 1863 relentlessly drafted state-enrolled militiamen, could envision any armed uprising of the populace. What people, with what arms? The design of the CSA war machine made this impossible.

That tiny residue of militia husbanded by Gov. Joe Brown against the depredations of Davis' government gave good service against Sherman's march and a glimpse into a potential revolutionary war that might have survived April 1865 had the Confederate military been organized on a completely different basis.

[Quote from Jefferson Davis, Confederate President by Hattaway and Beringer]

When history repeats itself 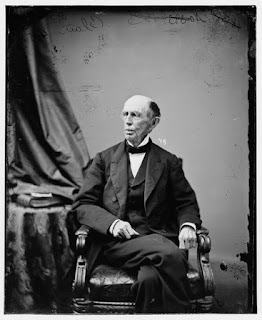 I won't be as hard on our wretched ACW books any more. Perspective at last.