You can read Emory Upton's magnum opus, The Military Policy of the United States, thanks to Google. Likewise his Armies of Asia and Europe.

By the turn of the century, Maj. Gen. (Brevet) Emory Upton was a very big deal. 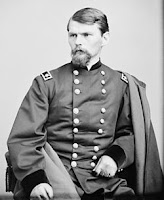 Emory Upton went through the Civil War as a McClellan hater; after the war, with study and reflection, he became an admirer. Being brother-in-law to Frank Blair might have softened him up.

Upton was a prodigy, entering the Civil War as a second lieutenant of artillery. By the end of the war, at 25, he was a general who had led all three branches well. He finished as a division commander. Sixteen years later, he committed suicide.

After the war, Sherman sent Upton to Europe as a one-man Delafield Commission. He returned with recommendations, famous among which was that the U.S. should model the Prussian general staff. He is viewed now as the father of the American general staff.

But McClellan and the rest of the Commission had missed an opportunity to advise Jefferson Davis to start a Prussian General Staff in America and Sears is very hard on McClellan in particular for that failure. Sears has many followers in this.

The foundation of an Army War College is another of Upton's ideas and he is justly credited for it today. (The son of the political Civil War Gen. John M. Palmer would attend the Army War College founded on Upton's recommendation.)

We could list many realized ideas advocated by Upton but the biggest of them all is the eternal notion of the expansible army. This originates with Calhoun but Upton made it his own, modernizing it in the form implemented in the 20th Century. The expansible army consists of a large regular standing army, men and officers, with a capability of expanding further in crisis. Upton rejected the idea of a small standing army bolstered in war by militias and volunteers. Upton proposed to learn from America's wars, especiall the ACW.

The Army as we knew it in recent times, through the first Gulf War, was Emory Upton's child. Upton's ideas are doctrine - even gospel - today.

At the time of his suicide (1881), Upton the theorist, was a failure. His reputation grew after his death and the first major effort to legally establish an expansible army came after WWI.

And so, James Wadsworth had an unusual career as political general.

He began as a military celebrity, his reputation earned within the powerhouse New York state high command during the crisis of Lincoln's inaction. His federal career was launched under Stanton's (not Lincoln's) patronage, however, and where a Banks or Butler would occasionally have some role demanding political skill, Wadsworth was in field commands until his death. He was this odd duck of a purely military poltical general.

As mentioned yesterday, his removal from New York via U.S. commission solved a political problem and thereby marked the end of Lincoln's interest in him. Had Wadsworth won the governorship vacated by Edwin Morgan, had he persecuted and then crushed his Weed-Seward Republican enemies, Radical James Wadsworth might have become interesting to Lincoln as a threat ... the way Andrew Curtin was interesting to Lincoln after Curtin routed and then persecuted Cameron's forces in Pennsylvania, and after Curtin combined with Dennison of Ohio to formulate war policy with McClellan. But Wadsworth was a political casualty after his loss to Seymour, albeit one with strong friends in Congress. And he took refuge in an alternative reality called war.

The career of John McAuley Palmer follows a more conventional path for political generals. I don't want to make light of his patrotism and achievements but the pattern looks like this:

- Founds the Republican Party in Illinois (1856)

- Champions Lincoln to be Fremont's running mate at convention (1856)

- Is Republican national elector for Lincoln (1860)

If we leave it at that, this picture is unfair to Palmer. He had a distinguished military career and one that was very interesting, serving under Pope, Buell, Thomas, Rosecrans, and Sherman. Again and again, Palmer is saving somebody's bacon on the battlefield, with a glorious culmination at Chickamauga.

Take a look at these quick-n-easy web links: this one; here's another; here's another. Note how totally positive these career retrospectives are. If your heart has a military corner in there somewhere, it senses pangs of envy.

And yet, based on private statements made after the war, attributed anonymously to him, the military image Palmer had of himself is depressing.

Like Wadsworth, Palmer had a grandson and his grandson recorded these private thoughts.

We'll get to the thoughts, the sons and the militia shortly.

Just as we might view George McClellan's 1861 orders to D.C. as Lincoln's intended breakup of the powerhouse Dennison-McClellan team, so to the federalization of Generals Wool, Dix and Wadsworth appears to be the decapitation of Governor Edwin Morgan's amazing New York military high command, one that caused the president so much embarrassment at the war's start.

Obviously James Wadsworth was the junior member of this troika and where Wool was a Whig-cum-Republican and Dix a war Democrat, Wadsworth was a Radical who would come to lead the anti-Seward Republican opposition in New York State.

Upon Wadsworth's arrival in D.C., he immediately began caucusing with Radical legislators as if he were himself a legislator. He appears to have been used by Edwin Stanton against McClellan in the Spring of 1862 in the "defense of Washington" fiasco, but this is to underestimate the political power of Wadsworth at that time.

Wadsworth squandered his political capital in the fall of 1862 when he overturned the Weed-Seward plot to run Democrat John Dix for governor on the fusion "Union Party" line in New York. Running as a full-blooded radical Republican, General Wadsworth lost the election to Democrat Horatio Seymour. By mid-war, Wadsworth reverted to being just another political general. Later in the war, Charles Wainwright could look at the errors Wadsworth was making and regard him as a bungler. In his Diary of Battle, he did admire Wadsworth's personal qualities.

Killed in 1864, Wadsworth died the richest general in the Army (by legend). He was a patroon, like the Delanos, and oddly enough the Wadsworths and Delanos were McClellan's next door neighbors in what is now E. Orange, New Jersey.

I'm not sure which Wadsworths lived so amicably next door to GBM, but General James did leave behind a son, and a grandson more on whom later.