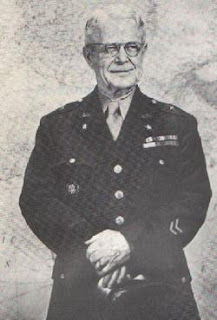 With March's "Uptonian" plan off the table, Wadsworth and Palmer began designing their own army. This (after political give and take) became the National Defense Act of 1920. There is a handy summary of what follows in The Second World War: Asia and the Pacific. I excerpt here at length:

Palmer's ideas were not those of the majority of the Army's general staff officers, who were disciples of the pensive Emory Upton, the Army's most influential 19th Century theorist. [...] The staff had updated the "expansible army" of John Calhoun and modernized Upton; but while it had convinced a reluctant chief of staff, Peyton March, to support the plan, it could not sell the program to Congress.

Palmer recommended a citizen-based army, which he felt was far more appropriate for a democracy. In his plan, while the Regular Army would be the vanguard of the ground forces, the National Guard and the Organized Reserves would provide the bulk of the wartime army. Citizen officers would command most of the citizen soldiers. In peacetime, the Regulars would train their associates in the Guard and Reserves. While Palmer also hoped for universal military service [in Swiss-type reserves - DR], this unpalatable position was not acceptable in peacetime.

The old Hamilton-Jefferson controversy between a purely professional and a militia-based defense force had been resolved in favor, once again, of the militia. Palmer had proposed an army in the American tradition. Politically feasible, the proposal was favored and accepted by the Wadsworth Committee. The Army's official [March] program was discarded because it was too un-American, was so much of the philosophy of the Germanophile, Emory Upton. [...]

All of this looked good on paper, but unfortunately Congress did not provide sufficient funds to implement the National Defense Act [of 1920] fully until 1940.

In other words, the infamously puny and underfunded interwar Regular Army was "half a loaf" - just a slice of the Wadsworth-Palmer plan.

There is a profound lesson in this for military theorists and planners. There is also an odd twist. Palmer lived to see the Act of 1920 funded. He also lived to serve as the oldest American in uniform by the end of WWII (the picture, top, is from 1945).

p.s. To read more about the March-Palmer contest, you have to dig into out-of-print works like Toward a Post World War I Military Policy: Peyton C. March vs. John McAuley Palmer. 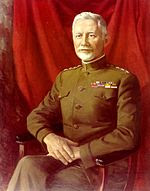 Peyton March and John J. Pershing were the dueling prodigies of WWI.

In June, 1917, March was a brigadier general with the artillery. By May 20, 1918 he was chief of staff of the Army. Our friends at Wiki write

As Chief of Staff he reorganized the Army structure, and abolished the distinctions between the Regular Army, the Army Reserves, and the Army National Guard during war time. He created new technical branches in the service including the United States Army Air Corps, Chemical Warfare Corps, Transportation Corps, and Tank Corps.

March was an opinionated infighter with strong views on how the postwar army should be organized. He developed a plan that is nowadays called Uptonian, but it went far beyond anything Upton envisioned by many magnitudes.

March's plan represented a prevalent view in the Army - it exists to this day - that equates readiness with having a large enough standing army to fight one or more wars from the starting gun. In this view, the militia or any federal reserve play a role in the force structure but they are not determinant in warfighting.

Peyton March envisioned a postwar standing (regular) army of 500,000 men. He drafted these views into a congressional bill that also included 11 months of universal (federally controlled and managed) military service followed by a long stint in the reserves. Groark explains more of March's idea:

Like Upton and Calhoun, March wanted the organization of the Army to include additional professional officers to man skeleton units, filled by enlisted soldiers during a national emergency. March’s plan received the approval of Secretary of War Newton D. Baker who introduced the bill on 16 January 1919 to the House Military Affairs Committee. Thus, March’s plan became the Baker-March bill.

March's bill arrived for review before the Senate's military affairs subcommittee. A leader of this committee was James Wolcott Wadsworth, grandson of the general, a National Guardsman and a believer in the Guard.

Wadsworth had recently discovered and been conferring with John Macauley Palmer, grandson of the Civil war general of the same name, and Palmer was the nemesis of all thinking Uptonian.

The new biography Beetle sums up what happened during Palmer's testimony on the bill: "Palmer's one-hour defense of the American citizen-soldier '[tore] Peyton C. March's bill into scraps,' according to James Wadsworth..."

Palmer had submitted his own, alternative plan directly to March earlier in the process to have it summarily rejected. That rejection was natural - this was an unbridgeable battle of military ideologies. Palmer's revenge was to help the March bill die on the vine.

Wadsworth after the testimony (via Groark):

Colonel Palmer, a very remarkable thing has happened. Night before last, the subcommittee met at my house where we finally disposed of the War Department bill by throwing it in the waste paper basket. We then decided to write a bill of our own. We wrote down a few paragraphs outlining what we considered to be the basis of a sound military organization for the United States. And there we stopped. We didn’t know how to expand those principles into a complete bill, and we didn’t think we were likely to get much help from the War Department. And now, to our amazement, you have been before us two afternoons and have given us all the details of our won plan. The Committee has therefore instructed me unanimously, to write to the Secretary of War to ask for your assignment as our military advisor. We are going to write our own bill, and we want you to help us.

Wadsworth and Palmer would craft the answer to Upton.

Now where were we?