The Crater: its air is the thing

PBS revisits the ACW. I like the angle but trust the context will be mangled beyond belief.

(1) Spend it and they will come: Manassas.

(2) Spend nothing, make them come: Horseheads.

How to count your chickens in heritage tourism

Apologies to Mad magazine, but when they say

What they really mean is 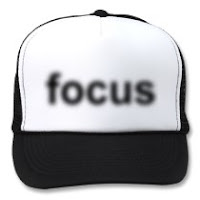 What are the chances that sixth grade moviemakers can create films "that will be used as learning tools for anyone who visits historic [ACW] sites"?

This project is a $400,000 extravaganza designed to amuse the teachers more than the students (note the quotes in the story - everyone talking about the excitement of the students, except the students).

The great thing about using sixth graders is that - historiographically - they don't talk back. Whatever you tell them happened, it happened.

The movies will be used at the battlefield [centers] and be streamed through other outlets.

It's a "science is settled" version of history and definitely a culmination of every evil trend since the Centennial.

Come here child. Take this camera and document the insights of a Pulitzer winner. That's a good little scholar.

Another potentially explosive "cannonball" - don't think we'll ever be rid of these stories.

This is more of a matter for Jim Schmidt's blog. nevertheless the news regarding Florida's dengue fever reminds me of my discomfort with the legend of McClellan's typhoid relapse in late '61.

I call it a legend because it is one of those endlessly repeated items that needs scrutiny. McClellan himself refers to the illness of December '61 as typhoid fever and as a relapse, which suggests he heard his own diagnosis from contemporary medicine. But contemporary medicine knew nothing of bacteria, which is how typhoid is transmitted.

Dengue is spread by mosquitos and the symptoms better match what we know about his "relapse." Dengue also reaches a dead end with the victim, unlike the "Typhoid Mary" effect which would fell some of the victim's cohort.

Let me suggest McClellan had dengue fever as we now define it. I cite recurrence; the nature of the symptoms; the duration of the December outbreak; the lack of contagion.

Here is a quick read on dengue fever and another on typhoid fever.

Farragut and his easy answers, updated

Four-star Admiral Mike Mullen, USN: "There’s no easy solution, and there will be no quick fix." (2008, on Afghanistan)

"... there are no easy answers there and it takes a considerable amount of study, participation and engagement to get your arms around what the challenges are." (2010, on Pakistan)

"Adm. Mike Mullen, chairman of the Joint Chiefs of Staff, said Saturday that there are no easy answers." (2009, on rising military suicide rates) 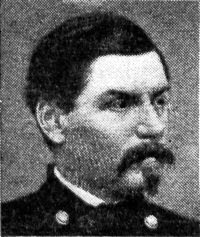 This is a photo I have not seen before used to illustrate a not very interesting website. The late Brian Pohanka shared with me his great collection of McClellan CDVs and this pose - almost a three quarter view - does not match anything therein. In its dimensions (unless it has been cropped) it is likely not a CDV at all.

I notice a moire pattern in the background that suggests the fine screen used in book publishing - or is this an illusion?

And the big, fat thumprint on his cheek - very distinctive.

Clues welcome - send them along. 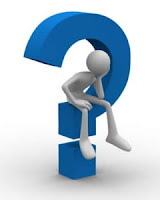 It is a staple of early war history that McClellan thought the Rebels knew his plans or could easily learn them if he shared too much.

This is generally presented as "McClellan thought" never as "McClellan knew." The most-prized historians offer it as yet another tile in their colorful mosaic of paranoid schizophrenia.

The publishing wave of Civil War letters and diaries that began in the 1990s validate McClellan. The oddity of prizewinners not understanding the impact of these letters and diaries upon their own doctrines is a deep subject covered here in postings past. Suffice it to say, the big men at the top are not reading contemporary stuff carefully enough, nor do they seem able to process what they are reading.

The overwhelming pattern in AoV early war memoirs and letters is an awareness of Union plans deep in Rebel ranks - down to company level in places. This is not consistent across all documents but it is persistent even if intermittent.

I read for this - used to actually log examples in a database that is no more. I invite you to do the same. What does the diarist or memoirist know? How does he know it?

The studies of Civil War intel I know of number only two, they are Union-centric, and they are feeble at best, to put it kindly. It may be a measure of Confederate excellence in this field that no studies have been written about their intelligence gathering (I set aside biographies of individual spies here).

It seems to me that historians generally fail to note that Southerners know Northern plans without Northerners knowing Southern plans. (Exception: McClellan's foreknowledge of Jackson's move from the Valley to turn his flank on the Peninsula; but this exception seems also unknown to historians.) Those who note the disparity don't care enough about it to investigate or filter their analysis accordingly.

A new biography of Stephen Dodson Ramseur, CSA, contains comments elaborating in detail on McClellan's Peninsula strategy made while Ramseur was a regimental grade officer. These will bear a closer look in later posts.

Your Antiques Roadshow moment has arrived

The oil painting described here is a color rendering of Alonzo Chappel's work (seen here). Looked familiar, eh? I had seen the engraving before.

Here's the neat part. Chappel ran something like Andy Warhol's art factory. His assistants created engravings from oil painting originals. They were all based on Long Island. This painting was found on Long Island.

Is this Chappel's original painting from which the engravings followed? It is not known to the web compilers of his art. It is a find but is it Chappel's work or a rendering of one of his engravings by a student or third party? Answer that question and your Antiques Roadshow moment has arrived.

Chappel did many nice pieces. This Scott graced an Eisenhower book cover. Gather clues by comparing and contrasting the level of technique in Scott's face and horse with GBM's face and horse.

And have yourself a nice Civil War browse.

Tom Clemen's presentation of Ezra Carman's unpublished opus is nearly upon us and I want to take some space comparing it to Joseph Pierro's later this week. 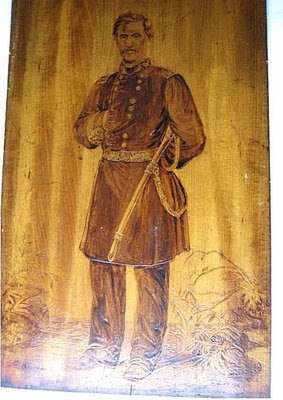 More McClellan visuals from recent research: this by the eminent and collected artist Robert Ball Hughes believed to have been done in 1862. The savagery of the attacks on GBM's reputation seem to have stimulated an outpouring of artistic expression.

This is "pyrography" and you can find another Hughes portrait burned into wood here (scroll down). 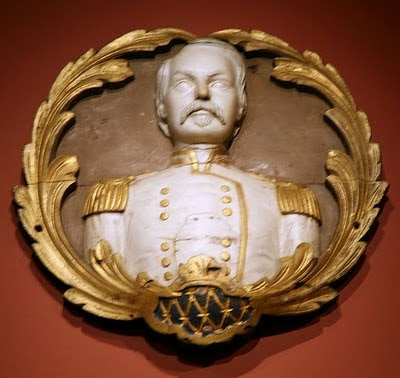 Hunting up the sources for the recent painting post has produced a bumper crop of imagery seeking exposure. This piece is irresistible: "George Brinton McClellan, c. 1862, Painted wood relief by Unidentified Artist; this wood carving was reputedly removed from the stern of a ship built in Thomaston, Maine." More to come.