New York's Sesquicentennial can be summed up in a quote: "It's a shame."

Meanwhile, do you see the pattern emerging in entertainment news (including the WaPo with its Sesquicentennial section)? The Sesquicentennial is being privatized and as a for-profit venture.

The film project "Lincoln" has bestirred itself. The movie was originally slated to appear in the Bicentennial of 2009 based on a long-forgotten work by the notorious plagiarist D.K. Goodwin.

The absurd choice of Irishman Liam Neeson to play Lincoln was resolved in classic Hollywood management style, the actor being set aside like a can of beans (read past this headline). No word on the genius pick of Sally Field to play Mrs. Lincoln.

The script seems done. No mention of the screenwriter's debt to the underlying book by D.K.G. - instead, it appears he compiled 18 notebooks of his own to get a grip on the material.

This screenwriter uses "messianic" in connection with "Lincoln." Do you think it will be preachy?

Harry says "Wa-Po Historians Declare How the Sesquicentennial 'Should' Be Observed." That pretty much sums up these pieces.

The people who were asked this question (how to conduct the Sesquicentennial) by their editor have been positioned for a long time to answer the question in their own way and on their own hook without goading; to volunteer their names and labor and money; and to pitch in (a la Eric Wittenberg) to advance Sesquicentennial organizing and events. It's odd to see this WaPo set of "bloggers" so late in the game stepping off the train to cast into our benighted Civil War circle a few coins of advice.

Even for the most pompous hacks bedeviling Civil War literature, the pose is unnatural because the question of how should a thing be done is much more common in the world of the Washington Post than in the fractious world of Civil War history. The WaPo's business model is to tell its readers right from wrong, salad fork from dessert spoon, jazz from blues. This manifests itself in endless lists (best this, best that), countless recitations of expert opinion on any topic under the sun, and a firm, guiding editorial hand to keep readers from ever reaching stray conclusions. This is what people buy the paper for, how they use it.

I had asked earlier, rhetorically, for whom this new Sesquicentennial feature is intended, and I wonder if it is especially aimed at the non-ACW reader (the WaPo consumer) who feels the need to have authoritative (if second-hand) opinions upon the august occasion of a Sesquicentennial.

As long as the new WaPo Civil War section trots out the name-brand hacks, we'll have no shortage of blog fodder here.

For instance, see this piece by Marszalek, in which he instructs us on how to correctly hold a Sesquicentennial. It's worth a quick Fisking.

What then can the Sesquicentennial do?

Note: The Sesquicentennial is not an agent, actor, corporation. Is this a literary device?

Note: Who or what is organizing "the Sesquicentennial"? Is this another literary device?

Those organizing it can let it be known that they want everyone included. "Lost Cause" interpretations must be put aside...

Note: Isn't that a contradiction?

... and the true history of the four year event and the Reconstruction period which came from it must be presented.

If there is a reenactment, it must include black and white soldiers and civil populace.

Note: This is quite a rulebook emerging. He should number the rules so statute breakers can be cited by paragraph. I like the contingency "If there is a re-enactment" during the Sesquicentennial. Wonder if there will be any?

Conversely, African Americans can take control of their central destiny in the Civil War.

Note: Past and present seem to be mixed up here. Anyway, this sentence is followed by a series of directives that African Americans are to execute during the Sesquicentennial. This beloved genius concludes,

It is about time that truth shine forth.

Thank heavens for pop history writers who can settle the truth for us and then issue the relevant commands.

You might like Mike Musick's piece better: he calls for "Renewed support for scholarly editions of significant documents" and "some observations that will not be welcomed by my friends in academia. Military history, for all its problematic aspects, ought not to be banished from our remembrance of what was after all a war."

Have coffin, will travel

Public history struggles to convey what it does not understand, and the results are always grotesque.

Shiloh: The Reality of War! 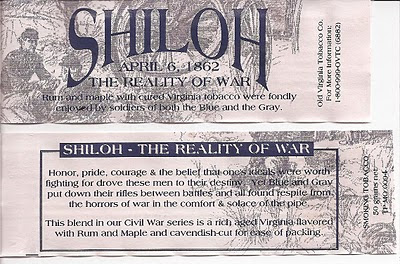 Coming to a pipe near you.

The Washington Post has started a major, recurring advertising supplement to its newspaper called Civil War 150 with an associated website. The paper copy is different from the electronic version in a number of ways, especially in being richer in advertising and poorer in content.

Yesterday a kind of man-in-the-street question was asked of six "expert panelists" in the print edition; today a seventh opinion appears online.

The "names" and "opinions" featured are those of the inevitables - writers and teachers without historical sensibility, without a feel for new work, and without curiosity. That being the case, I was intrigued to see four out of the six panelists say that Lincoln's election started the war; a fifth went further saying actually many more contingencies than that were at play; a sixth waffled. Is the beloved Centennial theme of the inevitability of war dead now?

The paper edition featured prominently a piece about Edward Ayers (buried in the online edition) and tried to convey, in a few hundred words, Ayers' respect for complexity and the underlying data. Recognizing this to be the inverse of Centennialism, they set Centennialist-in-chief James McPherson on him and McPherson's comment speaks volumes - about McPherson:

"I was never able to grasp what he was driving at there," McPherson says. What else is history but the imposition of pattern, order - in short, a story - on a universe of seemingly random and interconnected events? McPherson asks.

This is quite a good mission statement for hamfisted hackery and when you consider that the "order" referred to here is being surmised from secondary sources, you have a vivid picture of this genre of "historian" at work.

The WaPo's normal audience is a frivolous bunch, skimming the topics of the day, revelling in "what's hot," collecting restaurant recommendations, and investing great credit in whatever approved authority tells them about the events of the day. It helps to think of the WaPo roughly as the newspaper equivalent of a Ken Burns documentary and I expect the two share the same audience.

Therefore, I'm curious as to whom the editors think (and you think) comprises the audience for a section like this. My guess is buffs rather than WaPo regulars. Civil War 150 hangs on the answer, and it will be interesting to see this section evolve.

An unknown derelict D.C. building is reclaimed for history and a Clara Barton museum is planned.

Reminds me of a few decades ago, when the state government of New Jersey planned the demolition of Dorothea Dix's apartment in the State Hospital's Main Building in Trenton. My father was able to rescue a few period doorknobs before the wrecking ball struck.