This post is to acknowledge some of the many review copies received here over the last year even though most fall outside of my competence and interest. I'll give the same comments you would receive if we were browsing in a bookstore.

Living Hell: The Dark Side of the Civil War is by Michael Adams whom you may know through his Our Masters the Rebels, a book I thought interesting and worthwhile but as a "speculation" (author's characterization) it seemed to me to go too far. This new work looks to be a corrective the general run of airbrushed history, compiling the miserable squalor of the soldier's daily grind with the plight of civilians and veterans. There are war crimes too: "Evidence exists that, as the war went on, Union authorities deliberately reduced the ration" allowed to CSA POWs. This is the kind of remark that demands a little more exploration. So too do many hit and run observations: Thomas's "preference for winning through superior deployment;" "Many officers also failed to register that defensive firepower had shifted the tactical advantage...;" "Billets remained unclean." There is a tendency to footnote generalizations instead of argue them.

The Civil War as Global Conflict: Transnational Meanings of the American Civil War is a collection of essays under a title that suggests more focus than the assembled content possesses. Here we have King Cotton, atrocities, immigration, Gone with the Wind, quite the grab bag. The essay that attracted my interest especially was "Nurse as Icon," examining Florence Nightingale's effect on the ACW entirely as a pop culture phenomenon. The leading American nurses appear in Jane Schultz's piece ever so briefly as failed celebrities. This is a remarkable and disturbing way to approach Civil War meanings.

Last to Join the Fight: The 66th Georgia Infantry follows the misadventures of this late-war regiment through the famous end-of-war Western campaigns. Generally, the author works his data  into narrative but this book does offer one table and it is fascinating: it shows the individual and parental wealth of the regiment's officers. Of 25 officers listed, only one shows neither personal nor parental wealth; I notice $400,000 on the top end and these are US dollars based on previous census figures.

The 66th Georgia (speaking of which) rates no fewer than 13 citations in Robert Jenkins' The Battle of Peachtree Creek: Hood's First Sortie, an enormous study of 423 pages, not counting rosters, bibliography, notes, front matter, pictures, etc.  Two complaints about the book posted to Amazon address the unit-by-unit storytelling approach and the emphasis given to Stewart's part of the battle. My own complaint is about discouragement. I dread starting a book this detailed on such a specific topic outside of my more familiar reading. It seems an invitation to enter into disputes about which I know nothing. In this case, the treatment of Hood is of a mainstream/neutral flavor and Hardee is found wanting. The author, at least, is not a polemicist, and follows a process of describing actions and results.

Challenges on the Emmaus Road: Episcopal Bishops Confront Slavery, Civil War, and Emancipation offers, as its title says, an Episcopalian  view into the ACW. This does not, however, mean that this big book enjoys a single point of view. The material ranges across time and personalities and the effect is episodic. Our good friend Leonidas Polk figures here, as he ought to, but many others also appear briefly as specific issues come up. There is, for instance, the matter of John Pope's Indian executions, to which Minnesota's bishop objects. An interesting church history.

William Gilmore Sims's Selected Reviews on Literature and Civilization offers the views of a leading Southern critic in short pieces often on books or personalities known to us. Sims is regarded by some as the leading literary figure of that place and time but to those of us steeped in contemporary research, too much of this reads like ordinary newspaper fare. He becomes interesting when pushing outside that range of tone, for instance when savaging De Forest's  ACW novel, Miss Ravenel's Conversion ("the embodiment of all the brutal malignity Northern writers have ever conceived..."). Occasionally, the editors' introductions run longer than the piece itself, as in the review of Carlyle's Latter Day Pamphlets, and sometimes, as in the case of Carlyle, the underlying review is worthless except as a brand-name touch-point for readers and an opportunity for Sims to take another swipe at the North.

The Devil's to Pay: John Buford at Gettysburg: A History and Walking Tour brings us new work by Eric Wittenberg. We know the author as a cavalry specialist, a Buford advocate and a deep researcher whose treatment of primary sources is exemplary. This volume includes material from new primary sources, with the walking tour following the narrative in an appendix. There are other appendices (among maps, notes and other goodies), including Eric's masterful debunking of "The Myth of the Spencers" in Appendix B. This "Myth" reveals Eric's deep powers as historian, historiographer, researcher, analyst, and critic. If future writers skip this tome, mistaking it for a tour guide only, they will lose a broader understanding the general battle.

On the general theme of tour books, Savas Beatie has released a series of what might be considered to be battlefield backgrounders. These are not guides or map books but rather short, heavily illustrated descriptive narratives. The series includes Simply Murder, the Battle of Fredericksburg; A Season of Slaughter, the Battle of Spotsylvania Court House May 8-21, 1864; That Furious Strugle:  Chancellorsville and the High Tide of the Confederacy May 1-4, 1863; Hurricane from the Heavens: The Battle of Cold Harbor, May 26-June 5, 1864; and No Turning Back,: A Guide to the 1864 Overland Campaign from the Wilderness to Cold Harbor, May 4-June 13, 1964.

On October 6, 1858, The Loudon Democratic Mirror newspaper reprinted an article from the Philadelphia Evening Bulletin about the elections occurring in the Kingdom of Piedmont-Sardinia:


A Sardinian Election
[...]
The qualifications for a voter, though apparently reasonable to a "European mind," would be so many shackles to a freeborn American. In the first place, a voter is required actually to be born Piedmontais and to reside in the district where he votes.
[...]

Sorry I did not mention this earlier... a tie in between battlefield tours and nearby wineries.

A cocktail bar with an ahistorical name. 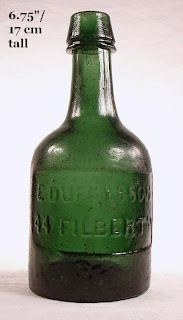