What's on at the ALPLM

Thanks to the gent who alerted me. He forwarded an ALPLM email notice with this additional detail:

Including...his secret life as a vampire hunter and the larger implication that vampires shaped the events leading to the Civil War!

They're gearing up for a slow year out there in Springfield.

General Abrams said to me one time, "There’s no way for you and me to tell whether what we are doing is right, because the decision of the rightness of it is not a military decision and so here we are; we sort of have to do the best we can." - Gen. Donn A. Starry, Press On! Vol 2. 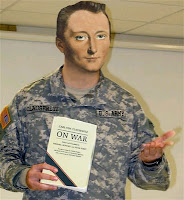 None of the Clausewitz extracts below are from On War. All are from From Carl von Clausewitz: Two Letters on Strategy translated by Peter Paret and Daniel Moran. Imagery via ChicagoBoyz.

Q: The modern Civil War reader has been taught to analyze the war through a series of military decision points. These points are reviewed and debated almost as if they were command and staff exercises. At the higher level they address large operational questions, what you called strategy in your day. Is this a productive way to use one's reading?

A: People still like to separate the purely military elements of a major strategic plan from its political aspects, and treat the latter as if they were somehow extraneous. War is nothing but the continuation of political efforts by other means. In my view all of strategy rests on this idea, and I believe that whoever refuses to recognize that this must be so does not yet fully understand what really matters. It is this principle that makes the entire history of war comprehensible, which in its absence remains full of the greatest absurdities.

Q: But surely, you can isolate and analyze some or most strategic and operational decisions in military terms?

A: War is not an independent phenomenon, but the continuation of politics by different means. Consequently, the main lines of every major strategic plan are largely political in nature, and their political character increases the more the plan encompasses the entire war and the entire state.

The plan for the war results directly from the political conditions of the two belligerent states, as well as from their relations to other powers.

The plan of campaign results from the war plan, and frequently-if there is only one theater of operations-may even be identical with it.

But the political element even extends to the separate components of a campaign; rarely will it be without influence on such major episodes of warfare as a battle, etc.

Q: What then are the limits on the political in war?

War in its relation to policy has above all the obligation and the right to prevent policy from making demands that are contrary to the nature of war, to save it from misusing the military instrument from a failure to understand what it can and cannot do.

A: The political purpose and the means available to achieve it give rise to the military objective. This ultimate goal of the entire belligerent act, or of the particular campaign if the two are identical, is therefore the first and most important issue that the strategist must address, for the main lines of the strategic plan run toward this, goal, or at least are guided by it.

Q: There is a tendency to portray the war as won purely on military terms by military means. Grant is held up as a "pure" military man specializing in relentless destruction of the enemy.

A: We must not allow ourselves to be misled into regarding war as a pure act of force and of destruction, and from this simplistic concept logically deduce a string of conclusions that no longer have anything to do with the real world. Instead we must recognize that war is a political act that is not wholly autonomous; a true political instrument that does not function on its own but is controlled by something else, by the hand of policy.

Q: How then do we explain the exclusion of the political from Civil War history?

A: The greater the extent to which policy is motivated by comprehensive interests, affecting the very existence of the state, and the greater the extent to which the issue is cast in terms of survival or extinction, the more policy and hostile feelings coincide. As policy dissolves into hostility, war becomes simpler; it proceeds according to the pure concept of force and destruction, and satisfies whatever demands can be logically developed from this concept, until all its component parts come to possess the coherence of a simple necessity. Such a war may seem entirely apolitical, and on that account has been considered the norm. But obviously the political element exists here no less than it does in other kinds of war. It merely coincides so completely with the concept of force and destruction that it vanishes from sight.

Q: There is a lot of contention around operational choices such as the best approach to Richmond, invasion of Pennsylvania, Red River campaigning. The ACW historian is relentless in draining political content from these evaluations. Even a move on Richmond is portrayed for its effect on the enemy army not for its political potential. Can these historians be correct?

A: I must insist that the military goals of both sides are stated whenever a strategic plan is drawn up. For the most part these goals arise out of the political relations of the two antagonists to each other, and to other states that may be involved. Unless these relations are outlined, a plan can be nothing more than a combination of temporal and spatial relationships, directed toward some arbitrary goal-a battle, siege, etc.

Q: Speaking of arbitrary, we see Lincoln besieged endlessly by military entrepreneurs pushing plans and Lincoln puzzling over them, seeking advice, then presiding over competing projects.

A: To the extent that a goal cannot be shown as necessary or superior to others, it can be challenged and contradicted by other projects, without these coming any nearer the absolute truth than did the first plan. That is, indeed, the history of all strategic discussions until today. Everyone rotates within some arbitrary circle. No one tries to push his argument back to the origins of the war that is to be fought, to its true motive, to the one and only point where the logical development and conclusion of the military operations can alone originate.

Q: That would require generals following the trickle of political hints and indications back to their source. If they don't do that - and American historians value generals who don't do that - how can a campaign be successful or a war won?

A: Whatever correct and effective strategic decisions are made result from the instinctive tact of talented commanders, who with a glance, penetrate and assess a mass of circumstances. This instinct suffices for action, but obviously not for analysis.

Q: There must be some use in applying military science to questions of military history?

A: I hate the sort of technical language that leads us to believe we can reduce the individual case to a universal, to the inevitable. Strategists manipulate these terminologies as if they were algebraic formulae, whose accuracy has long been established, brief formulae that may be used as substitutes for the original reality. But these phrases do not even represent clear and definite principles. Rather they are nebulous, ambiguous expressions, whose true meaning remains open to question. This is no accident. Their vagueness is intended, because they did not derive from what is essential and could be presented as universal truth.

Since it is impossible to generate all essential facts in a hypothetical exercise, it is evident that the more detailed our account, the more illusory it becomes. We make any number of tacit assumptions, and develop an analysis that in the end might not be relevant to one case in a hundred. Reasoning of this kind may still be useful to train our judgment, of course. But it is clear that such an analysis can never be satisfactorily refuted by equally arbitrary arguments.

Brooks Simpson has offered to host an exchange between Earl L. Ijames, a curator at the North Carolina Museum of History, and Kevin Levin on issues surrounding Ijames' research on black Confederates. The invite appears not to have been accepted.

p.s. If we cannot have an exchange of ideas, we can have a language exchange. Upon moving to Maryland after the turn of the century I learned that this name is pronounced "Imes." Frederick (which you all know) is near "Ijamsville" (they dropped the e) which I had even more trouble decoding phonetically than Virginia's "Enroughty" (Enroughty is pronounced "Darby" as the well-read ACW buff knows). Likewise, my tongue twisted on Maryland's Monocacy until I heard it from the mouths of locals as "Monoxy."

A correspondent pointed out the oddity of a 2008 book receiving the 2010 Lincoln Prize.

That time lag interests me less than Michael Burlingame winning this prize for the first time after 19 years of awards, many of them multiple (or split) awards.

Consider Burlingame's output, then take a look at their prizewinner list and tell me this game is on the level.

It was the non-event of the past two centuries: the Lincoln Bicentennial.

Someone believes that persistence pays.

The market sees a need