Not a Civil War Army 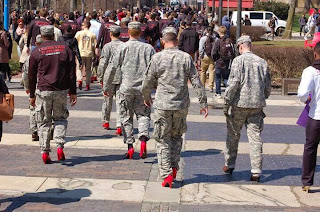 Not even close. The go along/get along Army culture on full display.

Music is seasonal. Before Easter, Parsifal. After Easter, Hindemith's When Lilacs Last in the Doorway Bloomd." As natural as the spring.

Whitman's elegy to Lincoln has more music settings than Hindemith's. There is Dobrogosz's, McGrath's, Crumb's, and Session's. These are better tributes than any historian could pen.

Sadly, there is no good reading of the poem itself, apart from this grotesque curiosity. Avert your eyes and listen.

Harry makes good use of some of Larry Tagg's stuff to put Lincoln's reputation in perspective. The material is from The Unpopular Mr. Lincoln.

If I were Larry, I'd be more than slightly annoyed at LSU Press for publishing Loathing Lincoln: An American Tradition from the Civil War to the Present. I guess the editors there don't read other publisher's booklists. Their author even cites The Unpopular in his biblio. What is the point of this work?

And why can't book reviewers be bothered to learn what books preceded the tome they review?

Civil War history is discouraging enough but the Lincoln people, with a few exceptions like Tagg and Jaffa, are the worst of the worst.

OT - Tales of a Volunteer Army

I happened across a Russian site that was mocking the U.S. military for evacuating itself from Yemen ahead of 4,000 American civilians because to save civilians would have been "too dangerous" for the U.S. military. Sounds like a joke about the services' absurd "force protection" mission.

The joke is on us. Apparently, this is no prank info: Russia, China, Pakistan and India have been evacuating their own and ours since the U.S. Army, Air Force and Navy pulled out of Yemen.

Item: "On Thursday, 59 American citizens, and 40 relatives, were among 400 passengers evacuated from the Red Sea port of Hodeidah by the Indian navy ship the Sumitra."

Item: "U.S. officials have said they believe it is too dangerous for U.S. military assets to enter Yemeni waters and air space...That, however, has left Americans largely on their own to find a way out of the country."

Item: "A few dozen Americans have made it aboard U.N.-organized evacuation flights from Sanaa to Khartoum, Sudan, and others have made it out aboard Russian ships..."

Item: A State Department official [reiterated] ... it is too dangerous to risk a military operation to rescue Americans.

Too dangerous for whom?

Item: "The US government has been sued over abandoning its citizens in Yemen, where up to 4,000 Americans are feared stranded. Pentagon officials claim an evacuation would be too dangerous for military personnel to carry out."

Item: "US citizens stuck in Yemen have lashed out at Washington for ignoring their pleas for help as they try to leave the war-torn country."

Item: India has wrapped up a successful evacuation of 4,640 of its own citizens as well as 960 foreigners.

Meanwhile, the Army, reacting to publicity about collapsed morale, has changed the formulas that measure morale to improve results.

Not to mention
Stan Freberg, notable in history comedy

Dunning-Kruger: we're all guilty but some more than others 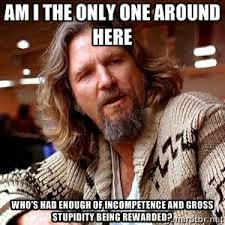 We used to say, "He knows just enough to be dangerous." Now we say, "This is a Dunning-Kruger case."

Dunning-Kruger is/be/are all over the Internet these days, and discussants do not dress in sackcloth. They are very concerned about those other idiots over there who don't know how foolish they are.

Now, Civil War discussions have a lot of pejoratives, many absolutes and all sorts of "common knowledge" backed by adamant posturing. OK, so here I am pointing my finger at those folks over there, but I avoid calling generals names and do not assume greater knowledge than the man who was there and on the spot.

How many of us presume to substitute our own judgement for a field commander's? How many do so with a caveat that the commander did not have information as good as ours ... and yet we don't analyze our own information? How many realize it's not entirely about the information?

Dunning himself has recently published an Internet piece justly called, "We are all confident idiots." He does not cite an ACW example but does mention pop culture evolutionary theory, a bugbear of mine. Dunning:

... purpose-driven misconception wreaks particular havoc on attempts to teach one of the most important concepts in modern science: evolutionary theory. Even laypeople who endorse the theory often believe a false version of it. They ascribe a level of agency and organization to evolution that is just not there.

"False" is a little harsh. "Outdated" or non-Darwinian is better. BTW, don't we ACW readers ascribe an agency and organization to the battlefield that is not there? Don't we know about the coordination and editing of battle reports?

But back to Dunning: check out your local public school and educational TV programming, especially. You'll learn that dinosaurs could not adapt (a Lamarckian formulation) but that successful mammals inherited those environmental adaptations forced upon them (Lysenko). Remarkable stuff and nothing remotely to do with Darwin and yet preached today as "settled science" by people who don't know the history of competing evolutionary theories. And Dunning falls into this by suggesting there is one "evolutionary theory." There are many evolutionary theories and some are discredited.

Our own little world is a simpler one. Nothing is discredited because there is only one master narrative of the ACW. The game is in retelling the story because there is nothing writers can say that did not already appear in Republican newspaper editorials during the war. The alternate Democrat analysis and commentary have faded yellow and crumbled to dust with the broadsheets of that era. Any new analysis is but a novelty that passes with any given publishing season.

Meanwhile this idiot general missed that glorious opportunity to end the war in a single bold stroke because of his [insert failing here].