The Union League of Philadelphia 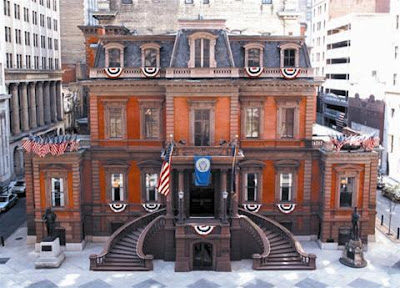 I had the pleasure of staying in the country's number one city club this weekend and discovered more ACW paintings than a military museum might have.

Like its sister clubs in New York and Chicago, the Union League of Philadelphia was formed during the Civil War by ardent Republicans and it retains its Republican character to this day with an emphasis on its origins, founders, and famous past members. It seems you cannot even descend a staircase without running into history-writ-large.

The blurred photo below shows Reynolds and a more obscure Pennsylvania general in attention-getting spots. 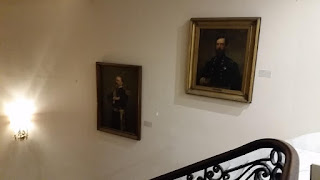 You pass them to approach a very large (here out-of-focus) George Meade. 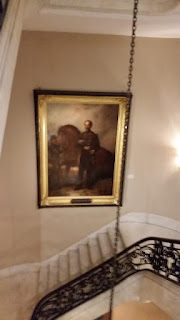 But this is just a warm-up because when you reach the bottom of these particular stairs, you will have passed the great proto-Republican, Whig Henry Clay, standing almost a storey high (in frame and normally in focus). The halo is not part of the painting proper. 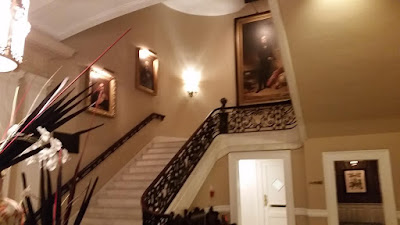 I am recreating here - in part - an actual walk from my room to my dinner inside the club, where I was destined to encounter Admirals Foote ... 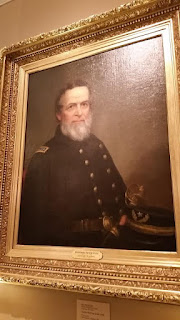 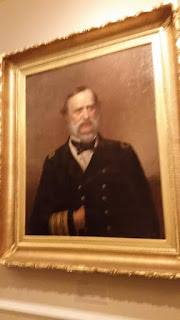 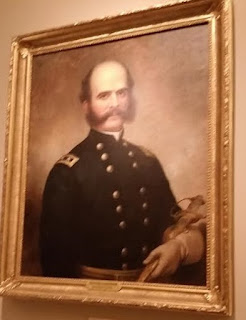 ... and Halleck, his visage gracing the business center. 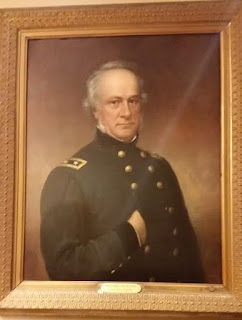 This is but the smallest sample of all the ACW portraiture, which collection is bound to include almost all of your Northern favorites. 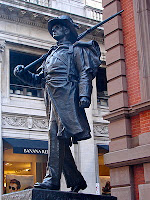 I was looking for my own favorite among all the Pennsylvania notables and was a little baffled at not finding him when it suddenly occurred to me - but of course, McClellan was not only a Democrat, he was THE Democrat of the war. It took a little time and a little Kremlinology to figure out this omission.

Having mentioned "museum," note that the League has its own and the exhibition in place now is called "1865: Triumph and Tragedy." The public is admitted to the museum (only) two days per week.

I did not happen to visit the League's own golf club (Torresdale) and cannot vouch for historical contents of that location.

The city premises do boast a smoking bar, however, with windows overlooking Broad Street and this statue of a member of the 1st Pennsylvania, recently outfitted at Banana Republic. Enjoying my smoke at the window, watching the street and the statue, a few tourists happened by to take both of our pictures (mine inadvertently).

The nicest bar feature was this painting done with a sense of humor. 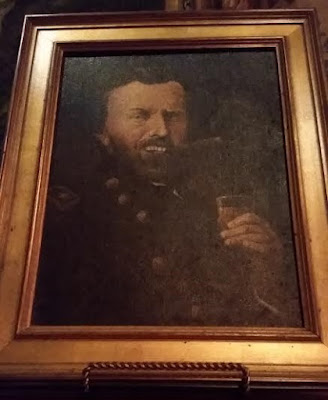 We had this understanding in our family (growing up in a medical community) that American doctors (high achievers) had gained just enough culture to get through school beyond which they might only glean this or that odd bit from TV or newspapers. So we might tell David Gelertner that his complaint is not new:


I’m a teacher of college students. I’m lucky to be at one of the best colleges in the world, at Yale. Our students are as smart as any in the world. They work very hard to get here. They are eager, they’re likable. My generation ... we always thought we knew everything about every topic, our professors were morons...

My students today are much less obnoxious. Much more likable than I and my friends used to be, but they are so ignorant that it’s hard to accept how ignorant they are. You tell yourself stories; it’s very hard to grasp that the person you’re talking to, who is bright, articulate, advisable, interested, and doesn’t know who Beethoven is. Had no view looking back at the history of the 20th century – just sees a fog. A blank. Has the vaguest idea of who Winston Churchill was or why he mattered. And maybe has no image of Teddy Roosevelt, let’s say, at all. I mean, these are people who – We have failed.


...we have second-generation ignorance [that] is much more potent than first-generation ignorance. It’s not just a matter of one generation, of incremental change. It’s more like multiplicative change. A curve going up very fast. And swamping us. Taking us by surprise.

We might add to his list a lack of curiosity. But I don't think Yalies or other strivers are much of a threat to culture generally or to publishing or history specifically because they've never been part of the serious reader demographic.

For example, by the 1980s, Princeton, the school,  had been overrun by strivers and the town itself was inundated with relocated businessmen. Browsing the Princeton University Bookstore one day, I asked a clerk if the store stocked a certain author. This clerk was one of the town's old timers who worked to get out of the house, wore fine clothing, pearls and heels on the job. She gave me pained look and whispered. "all they can stock here are New York Times best sellers."

And it wasn't even the kids buying that stuff, it was the newly headquartered corporate folk.

Civil War history attracts autodidacts. As long as we have those - and they are all readers - there should continue to be a market for interesting histories.