Tim Reese is as intrigued by the McDowell hat mystery as I was. His email is worth quoting at length:

Your closer about McDowell’s ubiquitous “hat” got my wheels to turning ...

The basic shape of the toppee or sun helmet was devised well before the Indian Mutiny of 1857. It was manufactured locally - primarily at Cawnpore - for use by troops of the Honorable East Indian Company’s private army, hence its more common use by HEIC troops rather than Queen’s troops. These were the days of forced concessions to both comfort amid heat and of rudimentary camouflage. Though white cloth was a near standard, varying shades of gray and khaki (i.e., dust) colored-cloth were also used on occasion. One popular pattern dubbed the “pipe helmet” had a tube affixed to the crown to admit fresh air (bottom center), though the “button” style ventilator quickly became universal.

The attached montage illustrates patterns in use during the 1850s and beyond. 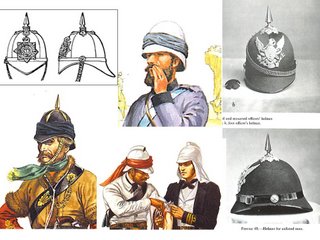 The type shown at top center was most common, a basic shell banged out en masse. These were easily and cheaply made, at first of wicker, then universally of cloth-covered sheet cork.

It is conceivable that McDowell picked up one of these shell-pattern helmets while in India. Metallic embellishments on the other hand are suspect. It would be interesting to see if any contemporary sightings of McDowell’s headdress specify use of a spike and badge. Though present on very rare Indian examples, their use was unheard of in British service for decades thereafter.

The brass crown spike with floral base and brass star badge at front are of another era. The popularity of the spiked helmet was spurred by the Franco-Prussian War, 1870-1871, the British then adopting their own cloth helmet circa 1880 (left top) in imitation of the Prussian pickelhaube. The U.S. Army did likewise circa 1881 (right top & bottom). Confusion arises when one fails to perceive that the full-dress cloth helmet and the toppee/sun helmet experienced wholly separate evolutions in all national services, Brits alone retaining theirs for foreign service into the 20th Century.

The crown spike with floral base had different patterns for officers and for enlisted men. Moreover, the use of an eight-pointed radiant star badge [shown in yesterday's post - DR] far exceeds the period in which McDowell supposedly procured his example. The star badge itself - generic, devoid of regimental insignia - is strongly reminiscent of American militia use. Its spike and base more closely resemble those used on the later regulation American pattern cloth helmet.

[...] Imagining the helmet without these trappings might explain in part why it appeared so visually offensive to many viewers.