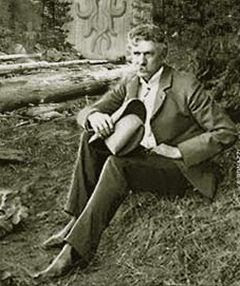 Speaking of Craig Warren, he has quite an interesting link to some research on the death of the US Volunteer Ambrose Bierce. It seems Bierce may have collected all the bullets in Mexico that he missed at Perryville, Shiloh, Chickamauga, etc., in one fell swoop:

I talked with two eye-witnesses who had seen the whole thing. Apparently he suspected nothing until the three men turned on him and began shooting.

The first shot must have struck him in the leg or belly, because he dropped down, squatting on his heels. And the two Mexicans were impressed by the strange way in which he died. He squatted there in the dust of the road and began to laugh heartily. The three men kept shooting him, hitting him, but they could not kill him, and he did not stop laughing.

He sat there and laughed till finally they shot him in the heart. The Mexicans were amazed because he was laughing as though it were a tremendous joke that he was being killed.

Which reminds me of a couple of Bierce stories from the funeral of author Percival Pollard.

The first: Bierce and H.L. Mencken were riding to Pollard's funeral together. Bierce was reputed to have broken with all his friends and yet, Bierce commented, he remained friends with Pollard "and that was for the reason of Pollard's untimely death. Had Bierce known Pollard was to die, no doubt he would have effected a quarrel with him."

In the second, Mencken, who arranged the service, asks Bierce what they should do with Pollard's remains. Bierce answers, cremate him, mold the ashes into bullets, and then fire them at Pollard's critics.

The Mexican shooters may have been channelling Bierce's own critics on that day.