Stand by for bad history - or not 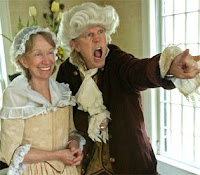 The McChrystal affair had me quaking in my ACW boots. Expected that hack newspaper writers would lie in wait behind every bush to whack me, an innocent newspaper reader, with their half-baked McClellan firing memes.

Surprisingly, the cop who kept order was none other than Goodwin, driving the NYT patrol car. She's not an honest cop, but her baton seems to have kept the riffraff in line.

AP juiced her stuff up:

Abraham Lincoln swallowed the preening and nasty behavior of the North’s top general, George McClellan, which historian Doris Kearns Goodwin pointed out included references to Lincoln as “the original gorilla.”

But my hunch is that Doris Kearns Goodwin has the most influential take of the day. She asks “what would Lincoln do?” The answer? Turn the other cheek to McChrystal’s “insolence” and focus on the task at hand: fighting this war.

The analogy at hand now becomes that of Truman/MacArthur, "the firing of McClellan" having been taken off the table by this "eminent historian."

Don't buy stock in the "trials of Lincoln" meme; you would never want to work for the man. This is, however a step up from the super-compressed GBM firing image most Americans seem to carry around with them.

A couple of words are also in order about the NYT piece. Forgive me, if you know this already:

(1) There were no "breaches of protocol." As Tom Rowland pointed out 15 years ago, the only evidence we have that Lincoln was once snubbed by a retiring McClellan is John Hay's word - nothing else.

(2) The term "original gorilla" was a Stanton catchphrase for Lincoln. It's use, if ever it was used by McClellan, would be an ironic allusion to Stanton's measure of the man. Trouble is, there is no evidence McClellan ever used the term publicly or in correspondence with his wife. It is scrawled in a notebook.

(3) All of Goodwin's "bad behavior" examples relate not to behavior but to sentiments discovered in a notebook. "McClellan's behavior" is a durable construct fabricated to serve wartime political purposes.

I don't think a prizewinning author could understand such distinctions but I hope the readers of this blog do.