In praise of slow marching 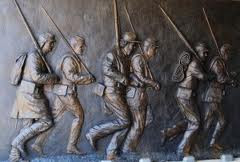 Our love of false data in Civil War history becomes fatal when we make that non-data the centerpiece of our understanding.

How many narratives use comparative strength data as proxy for adversity, for pluck, for character? Look closely and (I promise) you find the data is garbage which then turns the narrative into garbage. The better authors handle the data gingerly, with care, who know not to place loads where they can't be borne. The better authors are scarce.

On the other side, we get authors who are crazed by the imagined disparities they see in comparing sets of false data and who work to share their rage with the reader. This can spread from one (false) view of a battle into a generally false picture of the war and the men who fought it.

"How many" as an ironclad criterion is accompanied by "how fast" as another. Here's a typical complaint: "X's force covered only Y miles that day."

When I see that, I tend to run through potential research our author failed to perform:

"The general's divisions covered an average of 12 miles in three columns while under orders not to lose touch with each other while advancing on three separate axes."

"The general's troops covered 12 miles while his trains managed to close from a two-day gap to within a day's march of the lead elements."

"General Doe, having lost contact with the elements on his right and having received no new orders, halted his advance after 12 miles."

And here's a dig I should see but never do:

And so on. If you write Civil War books, the insufficiency of the record is no reason not to try and burn witches.

Another aspect of the historian's desire for fast marching at all times is the straggling factor. We moderns don't understand it, can't picture it, and can't figure it into our calculations.

A fast marcher, say Thomas Jackson, makes a tradeoff that the ACW reader is hardly even aware of. The forced marcher opts to inflict casualties on his own units in order to arrive somewhere faster. This is a hard decision to make and cannot be foisted on all generals everywhere as a standard. Loss of men by the roadside reflects attrition in delivering fighting power to the point of arrival. Some stragglers desert; some catch up; some become medical casualties. The numbers are never trivial and grow larger over distances.

The slow marcher is bringing as much of his command to bear against the enemy as possible; he is preserving cohesion and fighting power; he will increase shock in the attack or more stoutly defend a position assumed on arrival. His troops will be fed, his ammo will be supplied, his ambulances will be within reach. The hard marcher gives this up and disorganizes his own units for some gain or other. He has to know what that benefit is and he has to be right or he is bordering on relief and/or court martial.

The ACW writer's love of hard marching is a love of drama and storytelling. Miles of marching are spit out as hard data; the associated harsh judgements and snide asides tell us we are reading polemics, not history. We may as well be reading a blog.

(Thanks to Manny for finding merit in this post.)