GBM's "letters to his wife" in a diagram

I was thinking about those old rock band genealogy charts in the 1960s and it struck me that as I am not getting through to certain Civil War authors, let me draft a chart showing the crazy genealogy behind this Top 40 phenomenon that plays under the name George B. McClellan's letters to his wife.Click to enlarge) 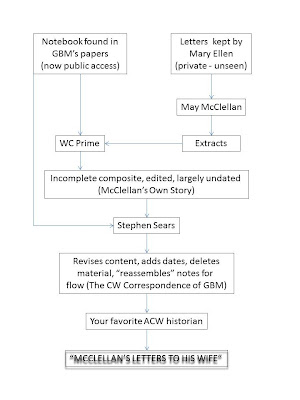 I was in a club in Albany one night when the Bay City Rollers made a surprise visit to play a couple of sets. There was one old guy and four or five young pups. Turns out the oldster was the "original" content. Likewise, in the late seventies a colleague saw the Box Tops and I asked her how it was. "They're not together anymore but the corporation owns the name and hires these bands to play under their name." The difference with "McClellan's letters" is we don't even know who or what was in the original band. How sad when writers bet the analytic farm on tertiary sources.

UPDATE 8/20/12 See this entry for diagram correction and more.