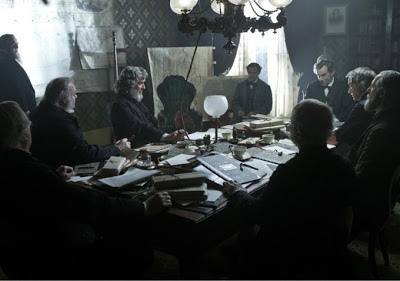 We didn't want it to be a movie of Abraham Lincoln's greatest hits ... what Lincoln and the lobbyists did to get this passed was not illegal. It was murky. To make a movie about a squeaky clean person whose moral principles hold them beyond mortal man or woman would not be interesting to me.

I wonder how the legion of Lincoln authors will respond to that.

Meanwhile, I speculated a break between filmmakers and the infamous Doris Kearns Goodwin and I was wrong. Screewriter Kushner consulted her much:

I had known Doris' work. I'd read everything else she'd written and I've always thought she's an extraordinary writer and shaper of narrative...

"Shaper of narrative!" I'll be using that.

“Doris' sense of who Lincoln was and how he did what he did became really the guiding spirit for the film,” the screenwriter said. I think it's the Kearns Goodwinian Lincoln that we follow. I talked to Doris two or three times a month, the whole time I was working on the script, and with great joy.

The many Lincolns of Abraham Lincoln seems to work against the whole point of history, doesn't it? BTW, is this kiss kiss makeup w/DKG? FYI.