Fuller and Hawthorne on older generals

From JFC Fuller's Generalship: Its Diseases and Their Cure:

In my book – The Generalship of Ulysses S. Grant – I pointed out that, in 1861, the average age of twenty Federal and Confederate officers who, as generals, played leading parts in the war, was thirty-eight and a half years. [...] In war it is almost impossible to exaggerate the evil effects of age upon generalship, and through generalship on the spirit of an army. In peace time it may be otherwise, but in war time the physical, intellectual and moral stresses and strains which are at once set up immediately discover the weak links in a general’s harness. First, war is obviously a young man’s occupation; secondly, the older a man grows the more cautious he becomes, and thirdly, the more fixed become his ideas. Nothing is more dangerous in war than to rely upon peace training: for in modern times, when war is declared, training has always been proved out of date. Consequently, the more elastic a man’s mind is, the more it is able to receive and digest new impressions and experiences, the more commonsense will be the actions resulting. Youth, in every way, is not only more elastic than old age, but less cautious and far more energetic. 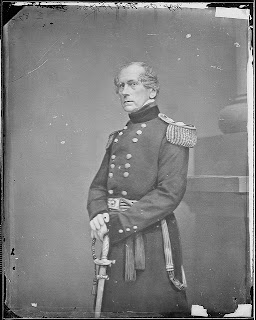 ... we were received by the commander of the fortress [John Wool] with a kind of acid good-nature, or mild cynicism, that indicated him to be a humorist, characterized by certain rather pungent peculiarities, yet of no unamiable cast. He is a small, thin old gentleman, set off by a large pair of brilliant epaulets,—the only pair, so far as my observation went, that adorn the shoulders of any officer in the Union army. [...] There can be no question of the General's military qualities; he must have been especially useful in converting raw recruits into trained and efficient soldiers. But valor and martial skill are of so evanescent a character, (hardly less fleeting than a woman's beauty,) that Government has perhaps taken the safer course in assigning to this gallant officer, though distinguished in former wars, no more active duty than the guardianship of an apparently impregnable fortress. The ideas of military men solidify and fossilize so fast, while military science makes such rapid advances, that even here there might be a difficulty. An active, diversified, and therefore a youthful, ingenuity is required by the quick exigencies of this singular war.[...] It is a pity that old men grow unfit for war, not only by their incapacity for new ideas, but by the peaceful and unadventurous tendencies that gradually possess themselves of the once turbulent disposition, which used to snuff the battle-smoke as its congenial atmosphere.

(Wool would have been 78 during Hawthorne's visit.)
p.s. Of related interest...
General Wool writes a letter
Generals who faint
"Why senior military leaders fail"

And for a blow-by-blow account of Wool's machinations against McClellan during the first Richmond campaign, see the most recent volume by the late, great Cap Beatie.