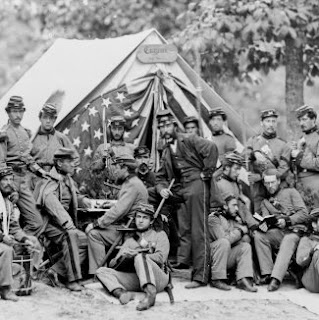 The image above shows engineers of the 8th New York State Militia in 1861 in federal service sometime after April 25th, when they mustered in. They were discharged August 2nd of that year, their national service finished. Here, they look fabulous for brand spanking new recruits, which, of course, they are not, despite their April enrollment.

Some other things they are not:
They are an abandoned resource of war.

The North's tragic misuse and abuse of its militia hinged on three external (or structural) constraints.

The first was legal. The calling forth of the militia in 1861 was bound by rules set in the Militia Act of 1795. The militia could be called up for only three months and the states fulfilled the first call for federal volunteers by offering militia units. Their war was over in 90 days. In 1862, a new law allowed for nine-month militia call-ups, meat for a separate post.

The second constraint was precedent. The Mexican War had established a 1-1 parity ratio of federal volunteers to federal regulars in service for army efficiency. Winfield Scott in 1861 asked for an amount of volunteers equal to the expansion of Regular Army rolls he had planned. Lincoln gave this to him (and I think this was one of several Scott suggestions that cost him Lincoln's support). Instead of mobilizing the entire militia strength of the North, states were allocated slivers of the 75,000 quota.

A third constraint was in the strength levels of the militias. States had the tendency to liquidate companies of fewer than X strength but at irregular intervals. This irregularity resulted in many seriously understrength units being overwhelmed by new men rushing to enlist at the outbreak of war and diluting the experience, competency levels and professionalism of the units they joined. Add to this the problem of entirely new militia units with no experienced men formed out of the "thin air" of war fever for the sole purpose of being mustered into federal service as part of a Volunteer regiment.

Minnesota's federal quota was 780 men.At the time of Lincoln's call, "Minnesota could count on the services of one hundred and forty-seven officers, and about two hundred men" in various militia units. This is a small nucleus but entirely sufficient to create an efficient regiment. Instead of a consolidation around this core, the state saw a flurry of new companies of utterly green men formed and put into service. The state's adjutant general picked "ten lucky [new] companies ... to form the First Minnesota [Volunteers]," a military tragedy that would repeat itself throughout the North.

However the rush to the colors did not overwhelm all militia units or result inevitably in scratch (phony) militia organizations. In New York, the active militia outnumbered the Regular Army of the United States, totalling 19,189, including 36 general officers. New York's quota was for 17 regiments; on April 16, the state mobilized 11 of its regiments with an aggregate manpower of 7,334 officers and men. If we take a regimental strength standard of around 800-900, this is not at all bad for a peacetime organization. These units had insufficient billets for the many volunteers who wanted to join up in the first flush of war but they also had shortages in equipment that delayed their deployments. The thought of the entire "New York Army" being equipped, mobilized and deployed gives pause. Likewise, the effect of 19,189 experienced instructors being distributed across a large national army is worth a ponder.

It's astonishing to think of these regiments returning to New York to muster out after Bull Run. Some re-enlisted into the new federal structure, but the militia, as a system, as an organized military force, even as a reservoir of potential, seems to have been frittered away.

p.s. Speaking of reservoirs of potential, consider the enrolled militia. The enrolled were men required by federal law to enlist in the state militia - their counterparts were men who actually drilled, marched, etc., known as the "active militia." The 1853 ratio of enrolled/active in Massachusetts, for instance, is 116,546 / 5,809. The enrolled militia appears to have been a manpower pool neglected by Washington and by the states.