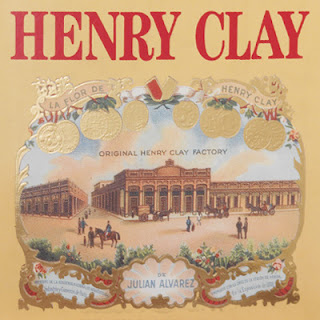 Speaking of cigars, no one in the ACW ever smoked a Grant but some may have smoked a Henry Clay which Wikipedia tells us was marketed first "in the 1840s." Naturally this cigar name would offend Democrats (Business plan: "I think I'll go for half the market").

I bought a Henry Clay tonight (in Union Station) and pictured Abe Lincoln of Illinois surrounded by his Whig cronies lighting one up outside the courtroom.

This compilation from Wiki is incredible:

English writer Rudyard Kipling mused, "There's calm in a Henry Clay," in his 1886 poem "The Betrothed."

Mentioned in English occultist Aleister Crowley's 1918 poem "Absinthe: The Green Goddess": "Here, too, sat Henry Clay, who lived and died to give his name to a cigar."

The brand is mentioned in Irish writer James Joyce's 1922 novel Ulysses: "Long John Fanning made no way for them. He removed his large Henry Clay decisively and his large fierce eyes scowled intelligently over all their faces."

Reference is made to Henry Clay as a London grocer's "finest cigar" in the 1929 Alfred Hitchcock film "Blackmail."

Mentioned in the poem "A Busy Man" by British-Canadian poet and writer Robert William Service: "And now I'll toddle to the garden/And light a good old Henry Clay."

Maurice Leblanc's gentleman thief Arsène Lupin was noted to have used a Henry Clay cigar to conceal a reply to an invented associate as a part of his escape from jail in "Arsène Lupin in Prison".

Per Service, I did toddle to the garden this evening and the Clay was good enough to inspire this addition to the literary canon.