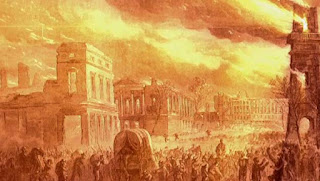 For the South, an offensive aimed to score points against the North's political resolve. A defense aimed to preserve Southern instruments of power.

For the North, an offensive aimed to destroy Southern instruments of power. A defense was to deny the South political advantage.

We should look at the CSA crossings into Northern states in this light. We should also use it to recalibrate our understanding of outcomes.

The Western Virginia campaign, for instance, represented no military intention and its victories were not military victories. They improved Northern political resolve, handing Davis a setback on his own terms. In the same sense McClellan's change of base denied Davis the kind of victory he needed - one with ill political effects.

Lincoln was trapped throughout the war by the need to deny Davis effects-based victories while pursuing the purely military end of destroying war-making power. Davis had to avoid destruction of military capability while trying to inflict fatal political effects on the Republican government.

Two of the starkest examples of "effects" that come to mind (though they were transitory) involve the tenor of the council (Davis, Johnston, Smith, Longstreet and Lee) after Fair Oaks and the signing of Lincoln's envelope by his Cabinet in 1864.

Sherman's march through Georgia failed, if seen as an attempt to turn tables on Davis by making "Georgia howl" and embarrass a hapless government. In terms of a Norther offensive "effects based operation," it was a failure, although it worked as a defensive effects based operation in helping re-elect Lincoln.

I touched on effects based operations in an old post. As a doctrine, it was formulated in recent times, This definition is useful and clear.

Military intellectuals picked up this ball and made an insanely complicated game around it. It was my personal experience that the military will pervert any fairly simple idea into a Mao Zedong Little Red Book guideline for living, thinking, being, breathing.

This well-earned backlash from Mad Dog Mattis (see especially the first few pages) attempted to rein in the crazies. No one below the strategy level need ever bother about effects based operations. I would argue that no soldier below four stars should ever even give it a thought.

My impression during the US war against Serbia was that "effects based operations" were a military rationalization, a strategy substitute where there was no strategy. This cannot be correct. Once the force authorizations were delimited to prevent total victory, military on military, both Clinton and the Serbs assumed the mantle of Jefferson Davis. Force was applied to try to reap political advantage. The staccato application of force seems random but tries for a cumulative effect.

In its simpler form, I think the idea of "effects based operations" is due for a comeback. I think it can be applied to Civil War history without being anachronistic.