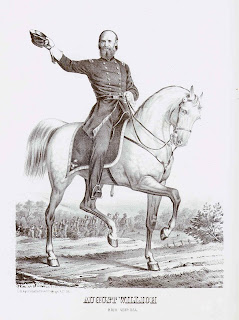 If I were directing a film about Shiloh, there must come a scene where Col. August Willich's 32nd Indiana, sore pressed by the Rebels, deploys its band which begins rallying men's spirits with blasts of La Marseillaise - as we are told actually happened. Exercising my artistic license, I would put these revolutioary Badeners under their beloved red flag. Then, I'd have my extras mouth a verse of that La Marseillaise for heightened effect:

Tremble, tyrants! and you, traitors,
The disgrace of all groups,
Tremble! Your parricidal plans
Will finally pay the price!

Hating (as deeply as he does) American political history, we can hardly expect the Civil War historian to break his high-speed narrative journey for a side trip down the tracks of contemporary European politics. As a result, we see through the window of our speeding storymobile, vestiges of information like abandoned crossroads or grown-over side streets when we hear that, for instance, Franz Sigel was a veteran of the Baden revolutionary war of 1848. This glimmer of information is then further obscured to be served up in formulae such as as, "he brought a reputation as a fighter and a liberal" to the Union side. An additional gloss is often provided on our ride down talespinner boulevard: "He fled Germany, eventually arriving in St. Louis, Missouri..."

Yes indeed he did. And as to the stops on the way, and what he believed and fought for, his political work, well, who has time for that? For Sigel, as putty in the hands of the ACW historian, prefigures the apoliticism imposed on all those American Civil War generals who figure as neutral characters in the Centennial narrative.

We must consider ourselves lucky to glimpse even the outside of the political dossier on Sigel. The inference offered by Civil War histories, when another German name is encountered, is that this is some officer recruited into an ethnic unit who eventually merited promotion or attention.

To get any glimpse into the lives and beliefs of Lincoln's German generals, we have to range far outside of Civil War literature into books like Exiles from European Revolutions: Refugees in Mid-Victorian England and Revolutionary Refugees: German Socialism in Britain. We learn there, for example, that August Willich founded in London the Communist League; that he recruited Sigel, Schimmelpfennig, and many other future Union officers to the League; that the League believed in a dictatorship of the proletariat; that Willich, Sigel, et al feuded with Marx and Engels (the same Engels who had been Willich's ADC during the Baden revolt); and that Willich wrote extensively on his beliefs ("We will make hell a well-organized union foundry.")

Willich was one of those sentimental Communists so common in Western Germany since 1845, who on that account alone was instinctively, furtively antagonistic to our critical tendency. More than that, he was entirely the prophet, convinced of his personal mission as the predestined liberator of the German proletariat and as such a direct claimant as much to political as to military dictatorship.

It may have been passages like this one that pushed Engels' buttons:

...in the rule of private capital in the relations of production, i.e. in the basis of its own existence, also lies its own destruction. [The bourgeoisie] does not understand that the nature of capital has become concentrated and that only then, the fourth estate, the proletariat, will cease to be revolutionary, because concentrated capital can only become social capital.

In other words, Willich says capital tends towards concentration, concentration emphasizes the social dimensions of capital, and the eventual transformation of financial capital will pacify the proletariat.

In any case, I'd have to put that little speech in my Shiloh movie as well. Union soldiers shouting over musket fire the terms bourgeoisie and proletariat. Our Centennial friends would curl up and die.