Welcome to your new command, corps commander. We're hoping you can help win the war in the next 40-odd days of your incumbency. 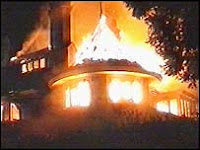 This post presents the inferno that was the Union corps commander turnover rate. It focuses on those formations most closely associated with the AOP.

The data below represents corps lifespans in days as calculated from Dyer's Compendium; the changes of command are from Eicher & Eicher's Civil War High Commands. The number of days (Dyer's) was divided by the number of changes (Eichers) to produce average number of days tenure in command.

The success story, from the viewpoint of stability, was IV Corps with one commander only, Keyes. On the other end was IX corps - though identified with Burnside, it suffered 30 changes of command.

For a modern perspective, keep in mind that the Vietnam tour for officers was six months, say 180 days, and that this was generally considered extremely destructive of morale, institutional memory, efficiency, and effectiveness.

Days were rounded up from 0.5 inclusive. The leap year in 1864 is accounted for.

This post makes no claim that the turnover rate for AoP units was higher or lower than for western corps. That would represent the next layer of analysis.

The illustration we have here is of the destructive incompetence of Lincoln, Stanton, and Halleck.