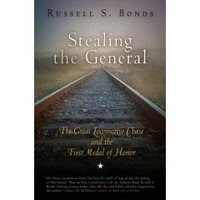 Russell Bonds is a first-time book author whose Stealing the General attempts to provide the best narrative art in combination with the best historiography. In addressing the "Great Locomotive Chase," he has waded into a great swamp of folklore, TV, cinema, suspect newspaper stories, and lying autobiographers.

It's not just a great first effort, it's a great book period. It demonstrates that sophisticated historical sensibility so sorely needed in Civil War history. In this two-part interview, we start off on an historiographic note.

A: For starters, more research! Both deeper and at the margins of the story. Letters and memoirs and books are essential, but what about newspaper accounts, depositions, interviews, local histories, railroad annual reports, etc.? Research is driven partly by a desire for completeness, and partly by sheer curiosity: what was the strategic inspiration for the raid? How did Atlanta get its name? How about Gen. Mitchel’s prewar career (astronomy and railroading)? Some of these research efforts will lead nowhere; some will be demoted to the endnotes; but some will help to inform and illuminate the story.

Beyond that, for me, the definition of the task changed as I went. I think I started out with a fairly simplistic view--first-time author syndrome, perhaps? I thought I’d just be compiling my sources to understand and tell a story that hadn’t been told in awhile. Happily, as I researched, it became clear that the task wasn’t retelling, but reexamination—-not just of the Andrews Raid but how its history had been built.

Q: So we have a setting straight of the record. Which is better: to let the reader unconsciously imbibe the corrected material while he drinks down his story or to point out fixes along the way? (Perhaps the publisher has an overruling opinion about this as well.)

A: I suppose I used a mixture of both: correcting errors along the way by simply writing a carefully researched history, but calling out specifically those instances where particularly glaring distortions or apocryphal anecdotes had worked their way into what had become in many ways an adventure story. At one point, I note some enduring myths about the locomotive chase—burning bridges, locomotives jumping over gaps in the tracks, etc.—in order to knock them down in turn.

But in my view it’s important not to be on a crusade, engaging in revisionism for revisionism’s sake. Overzealous efforts to correct the record often merely create a new and differently distorted record.

Q: This is unfair to ask but if another book on the Andrews Raid appears in a few years, what would you expect the "value proposition" to be? I'm not trying to be disagreeable but am setting us up for some historiography.

A: I suppose a nonfiction work would try to highlight some new or different research, or perhaps focus on operations on the Western & Atlantic Railroad, 1862-1865. Beyond that, possible value propositions: children's book? Locomotive Chase route travel guide? Then there's always a return to fiction (in fact, a local author self-published in 2007 what he called a "well-researched historical fiction novel" about the raid).

Q: Imagine a new Andrews Raid nonfiction narrative history. The author makes several strategic decisions. First, he will cite no secondary works whatsoever and make no references to previous works in the text. Second, there will be no bibliographic essay. Third, endnotes will consist exclusively of well-known primary source citations without comment. Fourth, where cited sources conflict in content, a single citation only will be offered representing the account that the author believes closest to the truth.

How viable would this work of history be in your opinion? Is it possible the publisher would dictate such a citational style? Currently, I'm reading two big-name authors who have started citing as per this "four point plan" above. (Your own way of citing is very different from what I described and I want to ask you about that next.)

A: Yikes, who are the big name authors? Maybe I've been going about this the wrong way!

To me, an Andrews Raid history presented under those constraints would be a missed opportunity.

Limitations like those you suggest may be plausible, even highly desirable, for certain studies where secondary sources and postwar remembrance would distract from the work: an investigation of morale in the ranks, for example, or a study of command decisionmaking where the writer wants to recreate the fog of war and eliminate postwar hindsight, hero- and villain-making, and self-justification. (In the former category, Tracy Power's Lee's Miserables comes to mind as an excellent book prepared under certain self-imposed primary source limitations.)

But with the "legendary" Andrews Raid--which was labeled "The Great Railroad Chase" within days by the Georgia newspapers--secondary characterizations of the story and conflicts in the accounts not only answer the important question of how the story was told, they also disclose certain truths about the episode and its participants.

Also: judgment calls are the privilege and province of the writer or historian, but having every conflict rely on an all-or-nothing winner-take-all decision by the author (who has insisted on keeping himself uninformed--I mean pure--of any influence by secondary sources), to me attempts to paint a color picture using black and white: even gray is not permitted.

My publisher wouldn't dictate such a style in citation, though I suppose he would be supportive if the approach were justified.

Q: I don't want to embroil you in anything, thanks for that answer - I hadn't thought of those possibilities. Your own endnotes are excellent. There's the citation, a comment where needed, and bits of historiographic analysis where needed. No sleight of hand here. Could you share your thoughts on notes and bibliography? And conflicting sources?

A: The bibliography is very important to any nonfiction work, of course; it's the foundation upon which the book rests. I also wrote a brief note on sources in order to (1) highlight what firsthand accounts were available, and discuss the disproportionate influence of one of those accounts on the historiography of the raid; and (2) to note the comparative lack of material on General Mitchel.

I footnoted carefully, in part because I was a new author and wanted to show that I had done my homework and how I went about doing it. In many instances, I included parenthetical information to complement the text and reward readers who choose to delve deeper--the director's cut, so to speak. Finally, I used the notes to record the many conflicts between sources as well as certain omissions (example: one raider records a final meeting the night before the raid; others either don't mention it or say it never happened). If I made an educated guess or judgment call, I tried to say so.

In general, my view is that more information is better, and I have a lawyer's disdain for "string cites"--a line of bare citation (e.g., 298 F.Supp. 1; 406 F.2d 830; 427 F.2d 1154) that takes up space in the brief but adds little to the argument. Happily, my publisher was very supportive of this approach and wanted no cuts in the endnotes, though they take up 45 pages.

Q: That example of different accounts disputing the meeting the night before the raid reminds me: there seems to be two schools of thought on a researcher staying neutral where the evidence is contradictory. One author I know got a review comment on a manuscript recently from a best-selling Civil War writer who told him to get off the fence and take a position. This suggests to me an ethos in which we assume the reader demands to be led. How much leading is legitimate?

A: I think the reader wants to be informed, which is not the same thing as being led. Judgment calls are important and are made by the author on almost every page, but contradictory evidence requires disclosure to the reader and careful handling. I'm all for taking a position so long as you disclose that which may argue against the position you've taken. (Example: I take the position that the mysterious James Andrews was born in Virginia in 1829; but I disclose in the endnotes the theory that he was born and raised in Eastern Europe, and explain why I disagree with that supposition.) Otherwise you end up with a work that "takes a position" on Lee's real plan or Hood's addiction with contrary evidence dismissed or ignored.

Rea Andrew Redd has some great pop culture imagery related to the Chase here. My own comments are here. Drew Wagenhoffer called this the best book of 2007. To be continued.